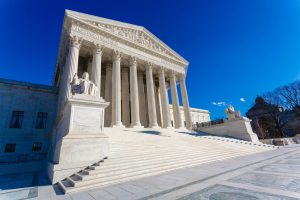 Politics and the Supreme Court

A constitutional lawyer says politics decides cases. So it has been, and will be.

By 1857, the time of the Dred Scott case upholding slavery, we knew that politics more than law decided cases.

In the 1930s, we had the Supreme Court striking down President Franklin D. Roosevelt’s new regulations until he threatened to pack the court and the same judges upheld what they had previously rejected.

Click here to read the full article on the NY Times.

Mr. Garbus is experienced in every aspect of litigation and trial, from jury selection to cross-examination to summation. He has argued cases throughout the country involving constitutional, criminal, copyright, and intellectual property law. He has appeared before the United States Supreme Court, as well as trial and appellate courts throughout the United States. He has argued and written briefs that have been submitted to the United States Supreme Court; a number of which have resulted in changes in the law on a nationwide basis, including one described by Justice William Brennan as “probably the most important due process case in the Twentieth Century”.