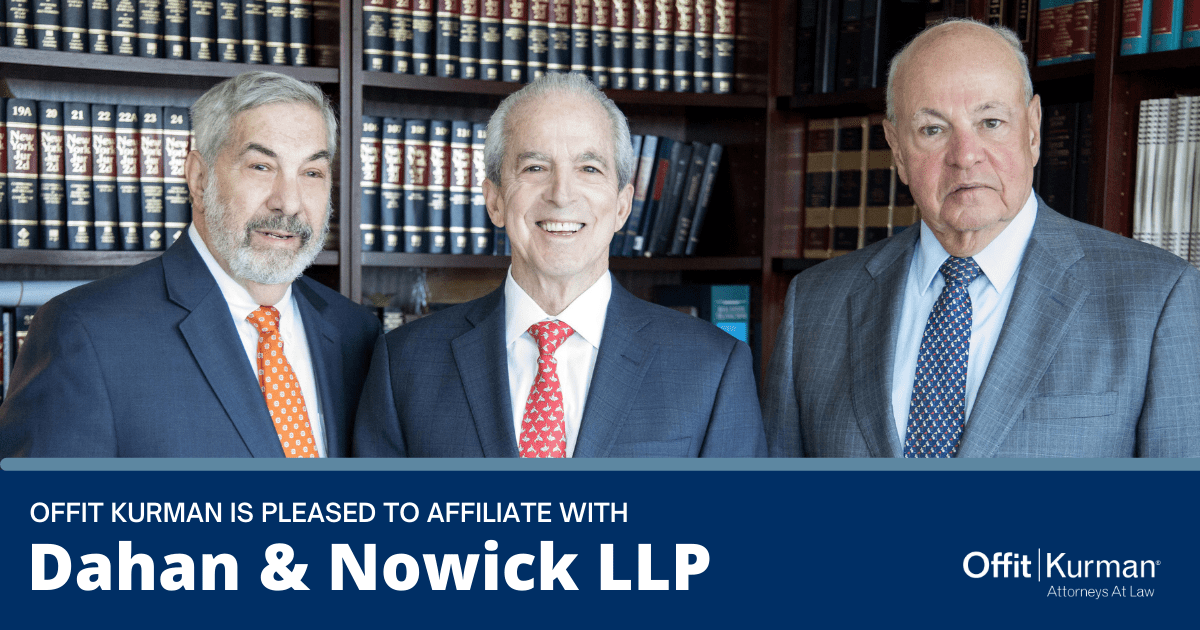 BETHESDA, MD. – January 5, 2022 – Offit Kurman is pleased to announce that the lawyers and administrative staff from the White Plains-based law firm, Dahan & Nowick LLP have joined Offit Kurman. Founded in 1979, Dahan & Nowick is a boutique provider offering sophisticated real estate counsel to clients across the country. The firm represents investors, developers, managers, owners and operators of office and residential buildings, hotels, restaurants and shopping centers in the New York metropolitan region and nationwide.

“We are delighted to join forces with the fine lawyers of Dahan & Nowick,” said Offit Kurman Chairman Ted Offit. “Over the past 40 years, Marc Dahan, Neil Nowick and Andrew Schiff have established an outstanding reputation as best in class lawyers for clients in need of sophisticated counsel in complex real estate transactions. With the addition of Marc, Neil and Andrew, Offit Kurman is an even better firm.”

Offit Kurman is honored to welcome the following Dahan & Nowick lawyers to the firm:

M. Marc Dahan founded his specialty real estate practice in 1976 in New York, New York, where the firm was located for 35 years, and has continued to represent developers, property owners and investors in a multitude of real estate-related matters throughout the country. With a national focus on the hospitality industry, he also advises on development, acquisitions, joint ventures, leasing, sales and financing. Mr. Dahan began his legal career as a law clerk to the Honorable Anthony T. Augelli, Chief Judge of the U.S. District Court, District of New Jersey.

Neil Nowick is a real estate practitioner who focuses on complex transactional matters involving the purchase, sale, financing, leasing and development of improved and unimproved commercial real estate properties. He counsels clients across numerous industries, including retail, hospitality and entertainment and has extensive experience representing landlords and tenants in intricate office and retail leasing transactions including upscale restaurant and high-end designer boutique leases.

Andrew Schiff is a seasoned attorney who handles a range of matters in taxation, real estate, commercial law and estate planning and administration. His extensive and varied practice allows him to draw upon his deep experience to offer clients tailored solutions to their estate planning, business and legal challenges. Mr. Schiff has also served as an Adjunct Assistant Professor of Law at New York Law School and Adjunct Professor of Law at the American College of Financial Services.

“All of us at Dahan & Nowick are thrilled to join forces with Offit Kurman, a firm that is as committed as we are to professional excellence and client satisfaction,” said Marc Dahan, founding partner of Dahan & Nowick. “Affiliating with a firm of Offit Kurman’s stature allows us to provide our clients with access to a range of comprehensive legal services that position them for success at every stage in their growth.”

In 2018, Offit Kurman entered the New York metropolitan area legal market with the opening of offices in Manhattan and Metropark, New Jersey. Building on its success in the region, the firm welcomed the lawyers from New York-based firm Snitow Kaminetsky Rosner & Snitow in September 2021. The addition of Marc Dahan, Neil Nowick and Andrew Schiff furthers Offit Kurman’s approach to purposeful growth of sophisticated legal services, this time in Westchester County. Today, more than 65 Offit Kurman lawyers practice in the New York region, and 250 lawyers firmwide. With the new office in White Plains, Offit Kurman celebrates its third location in the New York metropolitan area and it's sixteenth nationally.