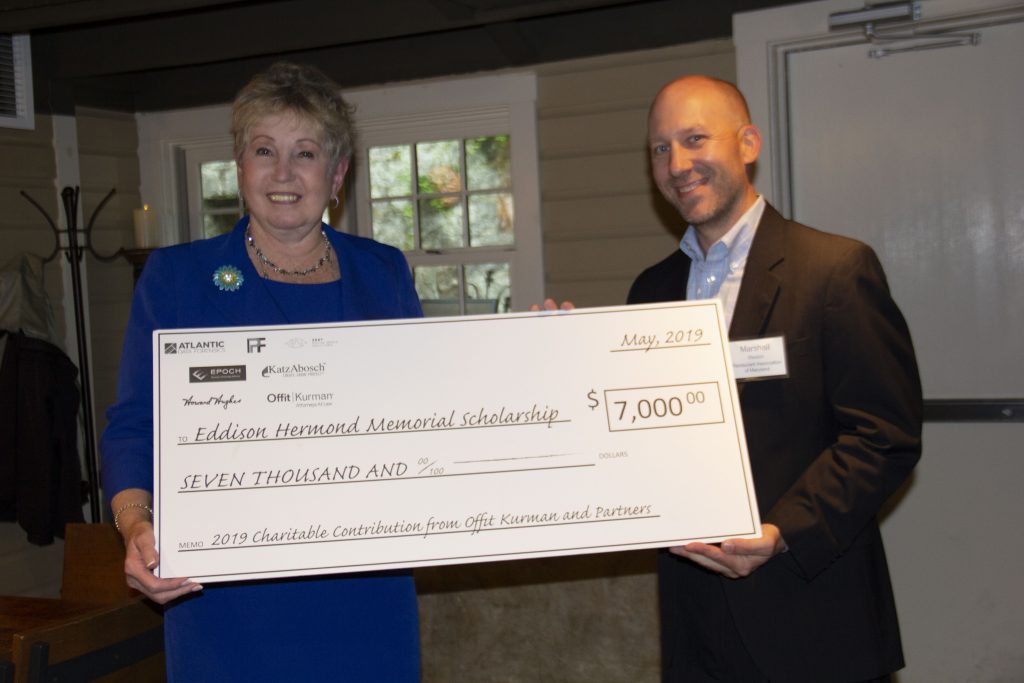 Ellicott City, MD | June 25, 2019  Together with a coalition of regional business partners, Offit Kurman has raised and donated $7,000 to the Eddison Hermond Memorial Scholarship Fund through the Offit Kurman Foundation and the Players Philanthropy Fund.

The Ellicott City Future Fund was created by Offit Kurman and business partners Atlantic Data Forensics,  KatzAbosch, Howard Hughes, The Epoch Team, and Zest Social Media Services. The Fund's mission is to raise money to help Ellicott City after the devastating flood of 2018. Offit Kurman was inspired by the actions of Brian Dykstra, President and CEO of Atlantic Data Forensics, who helped salvage data and computer equipment in Ellicott City following both the 2018 flood and the prior flood of 2016. Taking notice of Mr. Dykstra’s contributions, Offit Kurman reached out to him and the other partners to create a joint fundraising effort which included a digital fundraising campaign and partner matching contributions.

With the help of Matt Stover of the Players Philanthropy Fund (PPF), the group established the Ellicott City Future Fund and launched a digital social media fundraising campaign. Those efforts culminated in $3,500 in donations, along with another $3,500 in matching gifts from the Ellicott City Future Fund partners. Offit Kurman and Zest also worked together to conduct video interviews with Ellicott City business owners, including Victoria Restaurant Group CEO Randy Mariner, who suggested the group contribute the funds to the Eddison Hermond Memorial Scholarship Fund.

The Eddison Hermond Memorial Fund was created in honor of Sgt. Eddison Hermond, a fallen National Guardsman and former employee of the Victoria Restaurant Group. Sgt. Hermond died heroically during the 2018 flood when he attempted to save local business owner, Kate Bowman, from the raging waters. Although Bowman survived, Sgt. Hermond was swept away by the flood. In the hopes of continuing his legacy of service and love for the hospitality industry, Sgt. Hermond’s friends and family joined with the Restaurant Association of Maryland Education Fund (RAMEF) to establish the Eddison Hermond Memorial Scholarship Fund. The scholarship, which enables recipients to further their education and service to others, is awarded annually to a member of the hospitality industry who embodies the values Sgt. Hermond lived by.

The Ellicott City Future Fund’s $7,000 contribution was awarded to Eddison Hermond Memorial Fund last month at a special Happy Hour at the Manor Hill Tavern (owned by the Victoria Restaurant Group) in Ellicott City. Marshall Weston, President and CEO of the Restaurant Association of Maryland, accepted the gift.

Offit Kurman would like to thank all attendees, donors, and partners, particularly Mr. Mariner and Victoria Restaurant Group CEO Rachael Mull for their support and for providing an ideal location for paying homage to Eddison Hermond's memory.

More information about the Ellicott City Future Fund can be found at offitkurman.com/ellicott-city-future-fund.