When an attorney is contemplating moving from one law firm to another, both parties need to identify potential client conflicts, and will want to share baseline financial information about the other in order to assess the economic benefit behind the move, which invariably is the driving force behind the discussions in the first place. Both considerations are governed by the limitations contained within Rule of Professional Conduct 1.6. This article explores the tension between the desire to fully vet the economics of a potential lateral transfer and the need to protect client confidences.

Disclosing information about client relationships is no simple matter, and must be approached with care. Both the moving attorney and the receiving law firm are subject to ethical limitations on the form and content of the information exchanged.

The touchstone for the analysis is found in ABA Formal Opinion 09-455, Oct. 8, 2009, titled “Disclosure of Conflicts Information When Lawyers Move Between Law Firms.” It addresses the scope of the limited exception set forth in Rule 1.6(b)(7) to the general proscription contained in Rule 1.6(a) that all client confidences must be protected. Rule 1.6(a) stipulates that a “lawyer shall not reveal information relating to representation of a client unless the client gives informed consent,” except for disclosures that are impliedly authorized in order to carry out the representation, and except as stated in paragraphs (b) and (c).

Rule 1.6(b)(7) provides a limited safe harbor to this general rule in the context of an attorney changing firms. This rule provides that “a lawyer may reveal such information to the extent that the lawyer reasonably believes necessary … to detect and resolve conflicts of interest from the lawyer’s change in employment or from changes in the composition or ownership of a firm, but only if the revealed information would not compromise the attorney-client privilege or otherwise prejudice the client.”

The ABA opinion speaks to the scope of this permissive disclosure, and is summarized in the preamble:

Before the moving attorney can consider sharing client-specific information-even the identity of the client (if not already publicly known)-the conversations must have progressed to the point where the two parties are ready to discuss specific deal terms. At the very least, these terms could include such details as:

Unfortunately, many receiving firms do not want to wait until the point at which discussions get to such detail. Instead, they wish to analyze a prospective member’s client list, and its revenue-generating potential, at the front end, under the guise of conducting a conflict check. As I mentioned above, the idea is presumably to find out whether it is financially worthwhile to go through potentially protracted discussions leading up to a lateral transfer.

That said, such a request at the outset is improper under Rule 1.6(b)(7), and the moving attorney should resist agreeing to the request. Instead, the attorney should wait until “substantive discussions” have taken place. That determination is somewhat subjective, but if the parties believe in good faith that they have met the first condition, the moving attorney may reveal the identity of his or her clients as well as such other information as is required by the receiving firm’s normal conflict-checking procedures.

Nothing in the rule or the ABA opinion countenances such requests. Such information is unrelated to a conflicts check, and is instead reflective of the firm’s desire to measure the financial benefit of the prospective move.

The moving attorney cannot share this information without obtaining client consent. However, to obtain such consent the attorney would most likely have to explain the reasons for the request.

Doing so could easily morph into a conversation the prior firm could interpret as an impermissible premove solicitation of its clients.

Quantifying the potential economic benefit of a lateral transfer is obviously of critical importance to both the moving attorney and the receiving firm. One solution to overcoming the ethical proscription of Rule 1.6 could be to permit the moving attorney to aggregate his or her collections on an annual basis over the time period requested, without identifying which client paid how much.

Nonetheless, this could create a problem if the attorney relies on one or two clients for the majority of the attorney’s fees, in which case the receiving firm may already know who the moving attorney’s clients are. Indeed, the problem may be intractable enough that the parties forgo the move unless the receiving firm is willing to accept the moving attorney on faith, without a quantification of prior billings and receipts. If the moving attorney has a broad client base, on the other hand, or one that changes over time, then he or she has a reduced likelihood of disclosing client-specific billing when aggregated billing and collection information is provided.

Another solution may be found in other documents that do not specifically reference firm billings and receipts. The moving attorney is free to share tax returns, K-1s, and any other information about his or her income from the prior firm. From these documents, the receiving firm might be able to extrapolate sufficient information about the moving attorney’s fee-generating potential to take the necessary leap of faith.

Finally, there exists yet another alternative, depending upon the parties’ level of comfort with each other: The parties can agree on a trial period with financial incentives designed to generate a positive experience for both.

Any discussion between a moving attorney and a receiving firm implicates duties both have under the Rules of Professional Conduct, fiduciary duties to existing firms and partners, and the law of contracts. Regardless, it is still possible to satisfy the desire-on both sides of the prospective move-to quantify the potential economic benefit without running afoul of an obligation to a third party, specifically the duty to clients to keep their information confidential and the duty of loyalty to the prospective prior (i.e., current) firm.

Don Foster serves as the chair of Offit Kurman’s business litigation practice group. He is a seasoned commercial litigator with a proven track record in the courtroom, which includes trying cases to verdict in federal and state courts throughout the country. 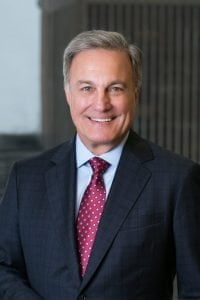 Don Foster has been trying cases to verdict in federal and state courts throughout the country for over thirty years. He also serves as outside general counsel and advisor to small businesses in a variety of industries. His trial and alternative dispute resolution experience is varied and includes disputes involving title insurance, intellectual property, health care, franchising, corporate governance, law firm dissolutions, attorney relocation and fiduciary litigation in Pennsylvania’s Orphans Courts.

Mr. Foster is a member of the Board of Directors of Highmark, Inc., one of the larger Blue Cross/Blue Shield companies in the country. He currently serves as Chairman of the company’s Investment Committee after chairing the Audit Committee. He also serves on the Executive and Corporate Governance Committees. Prior to the formation of Highmark, he served on the Board of Pennsylvania Blue Shield. Mr. Foster serves as a Judge Pro Tempore in the Philadelphia Court of Common Pleas, and has been appointed to a two year term as a Delegate in the Pennsylvania Bar Association House of Delegates.