Law Firms Are Flocking to Charlotte as the Southeast Flourishes

Originally Published in The American Lawyer By Samantha Stokes 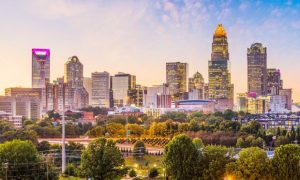 July 31, 2019 | New York, New York As law firms look to the Southeast as a region rife with expansion opportunities, there has been a flurry of new office openings in one major city: Charlotte, North Carolina.

Sandwiched between major markets with prominent legal communities—Atlanta, Georgia, and Washington, D.C.—the city of more than 850,000 people is both a commercial hub and the second-largest banking hub in the country by assets. It’s home to Bank of America. Recently, it’s also become the home of choice for firms looking to add an outpost in the Southeast.

“It’s the rare Big Law firm that doesn’t want to be in the Southeast,” said Tom Clay, an analyst at Altman Weil. “In North Carolina, the number of people wanting to get in there is just amazing.”

There are 59 law firms, including 30 Am Law 200 firms, with a non-headquarters office in Charlotte, according to ALM data. Many are recent additions to the city: Offit Kurman and Seyfarth Shaw both announced this month the creation of new offices there. The former will bring 27 attorneys to the city.

The latter plans up to 10 hires, a mix of lateral moves and current employees eager to relocate to a city where many of their clients are already based, according to Seyfarth Shaw managing partner Peter Miller. He said the firm’s growth strategy is driven by the location of its client base, and that’s increasingly been in Charlotte.

“Our clients have pulled us into that location,” he said. “We felt it was time to formalize our presence there.”
Miller said there were two specific areas driving the need for an outpost in Charlotte: real estate lending work for banks across the country and labor and employment work. Right now, Seyfarth’s office in the city is focusing on those two practice areas, though the plan is to grow into a full-service office.

“We’re leading with our strengths to start, and we will be rounding out those services and support services for our clients,” Miller said.

Clay said client opportunities are the main attraction for firms coming into the city and region, and health care, banking, aviation and manufacturing are all robust industries that present opportunities to firms looking to break in.

“There’s so much going on because of the favorable economic market,” he said. “A lot of this is driven by the current economy and perceived potential economy. At least right now, the Southeast is perceived very well.”

Law firms that already have a presence in the city are also capitalizing on the trend. Troutman Sanders opened its Charlotte office in 2014 with five hires from K&L Gates, a stalwart in the market. In July, Troutman hired three more partners and three associates from the Pittsburgh-based firm to grow its benefits and compensation practice.

Troutman’s Charlotte managing partner, Walter Fisher, helped launch the firm’s Charlotte office five years ago and has been practicing law in the city for more than three decades. He said the firm had focused on building an office in Charlotte for more than a decade to be closer to clients.

“There was a symmetry between the firm’s existing offering and client base and what we could bring by having a physical presence here,” he said, noting that Charlotte’s strength as a banking hub aligned with the firm’s focus on corporate finance and litigation.

Since the Great Recession, Charlotte has diversified its industry offerings and is in a stronger position to weather future economic turmoil, Fisher said.

“Our economy is fundamentally much more diversified today than it was 12 to 13 years ago at the outset of the Great Recession,” he said. “I’ve been here for 33 years, and the metamorphosis I have seen in that period of time is nothing short of remarkable.”

So far, Miller said Seyfarth’s client base has been responsive to the new Charlotte office, which he said filled a physical gap in the firm’s Southeast offerings (Seyfarth also has offices in Atlanta and Washington, D.C.). The firm plans to add a corporate lending practice and an employee benefits and executive compensation practice. Miller said that beyond legal opportunities, Charlotte is also a beautiful city with a good climate and world-class universities. Those attributes, on top of low costs, make it a good place to invest in business.

“It’s becoming a major center, and I don’t see that changing,” he said.

Reprinted with permission from the July issue of The American Lawyer. © 2019 ALM Media Properties, LLC. Further duplication without permission is prohibited. All rights reserved.