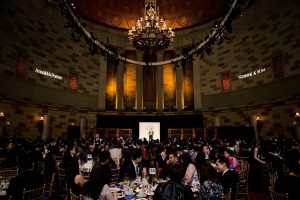 As an affiliate of the National Asian Pacific American Bar Association (NAPABA), KALAGNY is a professional membership organization that promotes professional development for members and provides legal support for the Korean American community. Through mentorship, pro bono clinics, strategic partnerships, and initiatives focusing on topics such as immigration and women’s leadership development, the organization seeks to address a broad range of issues impacting New York’s Korean American community. KALAGNY’s recent projects in service of its mission include immigration law workshops and information sessions, continuing legal education on emerging technologies such as blockchain and cryptocurrency, networking events for veteran and military attorney members and joint sponsorships with other prominent New York City bar associations.

The theme of KALAGNY’s 32nd Anniversary Gala was “Stepping into the Spotlight: Our Story, Our Time,” an idea that evokes the association’s long history of community engagement and advocacy by and for its members. In the words of Offit Kurman’s attorney, “what sets KALAGNY apart is our members’ dedication to each other and the community.”

“The friendships and networks that are formed as we volunteer together have always been KALAGNY’s soul and strength,” she wrote in the President’s Message for the Gala. “The encouragement and support of our fellow members inspire us and give us courage to step into the spotlight to tell the many stories that belong to our Korean American community.”

More information about KALAGNY, as well as a digital program and photos  (password: trailblazer) from the Gala, can be found at kalagny.org.