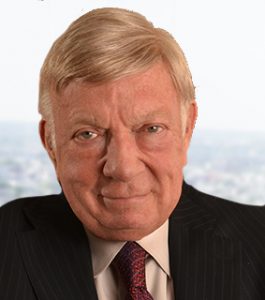 Offit Kurman is pleased to announce that Jerry Boykin has joined the firm’s offices in Tysons Corner, Virginia. He will serve as a principal-level attorney with the firm’s Commercial Litigation group.

Mr. Boykin focuses his practice on complex civil litigation. As a member of the Commercial Litigation practice group, he also represents clients in corporate matters, mergers and acquisitions, and other transactional work. For over 30 years, Mr. Boykin has been litigating on behalf of his clients on antitrust issues, restaurant franchise matters, copyright and trademark infringement, energy-related litigation, constitutional questions and business torts, such as breach of fiduciary duty. He has experience in more than 40 jury trials in Virginia, Maryland, and the District of Columbia. Mr. Boykin is a Vietnam veteran.  He has been awarded the Bronze Star and Air Medal and is a retired Naval Reserve Officer.

Mr. Boykin received his Juris Doctorate from Case Western Reserve University and his Bachelor of Science from Eastern Michigan University. He is admitted to practice in Virginia, the District of Columbia, New York, the Supreme Court of the United States, the U.S. Court of Appeal for the Second, Fourth, and District of Columbia Circuits, the U.S. Court for the Eastern and Western Districts of Virginia, and the U.S. Court of the Eastern, Western, Northern, and Southern Districts of New York.

To learn more about Mr. Boykin and to find out more about Offit Kurman’s comprehensive legal services, visit offitkurman.com.