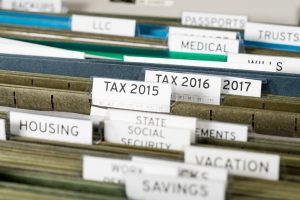 I get this question a lot, and not just from non-lawyers.  The answer, as with any question you ask a lawyer, is it depends.  Several different statutes of limitation apply regarding how much time the IRS has within which to audit your return.  The basic period is three years from the due date of the return or the date of its filing, whichever is later.  So, if you only recently filed your 2015 return, the three-year clock starts to run on the date your 2015 return was filed.  Had you filed your 2015 return early, say on March 1, 2016, the three-year clock started to run on April 15, 2016 (the due date of your 2015 return (for individuals), March 15, 2016 (for businesses)).  This means when your 2015 return is selected for audit, you need to be able to produce records that are now seven years old to substantiate any deductions taken.  Records get lost and destroyed.  Houses and businesses suffer casualty damage, people move, and dogs eat things. The IRS has heard it all and frankly doesn’t care.

If the IRS thinks you have understated your income or overstated your basis by more than twenty-five percent (25%), then the Service has six years (computed from the dates like the three-year statute discussed in the preceding paragraph) to audit your return.  If the IRS thinks the omission was fraudulent, they have forever.  Likewise, if you never file your return, then the statute never starts to run.

If you have foreign accounts or have signature authority over foreign accounts and are required to file a FBAR and Form 8938, the IRS deems those tax years open until those forms are filed!  So, if you had a foreign account that you should have but forgot to disclose on your 2010 return, the IRS can still go back and audit that return in 2022 because the filing was never completed because all the required forms were not filed, so the return was never filed to start the clock running.

The hits just keep on coming.  Recently the Tax Court upheld a Notice of Deficiency (NOD) against a taxpayer based on a net operating loss she incurred in 1999 and had been carrying forward every year.  Under IRC 172, an individual taxpayer can carry a NOL forward indefinitely until the NOL is completely used.  In this case, that’s what the taxpayer did.  The taxpayer had a large loss (initially more than $5,000,000.00) from a failed franchise.  She first claimed the loss on her 1999 return, which the IRS promptly audited and found no deficiency, i.e., the NOL was proper and fully substantiated.

The taxpayer (a CPA) dutifully carried forward and claimed the adjusted NOL each year (she used up a little bit each year), including 2014 and 2015.  The Service then challenges the 2014 and 2015 returns and denies the NOL.  Yes, this is the same NOL on the previously audited 1999 and 2000 returns that the IRS said passed muster. So, the CPA goes to Tax Court.  This is where is really gets good.

In Tax Court, the taxpayer introduced the 1999 and 2000 returns to which the Court held-get this-the taxpayer’s “proof to be insufficient to substantiate a taxpayer’s entitlement to a loss carryforward.”  Amos v. Commissioner, TC Memo. 2022-109. The Court noted, “The prior tax returns show only that [the taxpayers] claimed NOL carryforward deductions. They do not provide evidence that [the taxpayers] are entitled to them.”  Amos v. Commissioner. So, even when the IRS audits your return and agrees with your return, if the return is for the first year you are claiming a NOL that will likely be carried forward for years to come, you better hang onto those records that document and establish the NOL.

Currently, many of us rely on online banking, online tax payments (property and state income (in states that have a state income tax)), online brokerage activity, and a whole host of other things.  Each year, as you prepare your taxes, you should print out and retain copies of any online reports you rely on in determining your federal and state income tax liability.  Many service providers purge information after a few years, so it may not necessarily be available should you need it in response to an audit.  Retain copies (a personal scanner works great) to scan documents regarding basis information and expense deductions.

Setting aside the soundbites coming from both sides of the aisle, the practical reality of increased funding for the Internal Revenue Service is audits will increase.  As you may know, a return can be “selected” for audit in one of three ways: (1) the computer flags the return because certain figures or ratios of figures trip its algorithms; (2) the return is randomly selected for audit (nothing triggered the audit, it was just the taxpayer’s unlucky day); and (3) an examiner flags the return (more common in the estate and gift tax area, and other specialized returns, less so, but still possible, for individual returns).

Several years ago, the IRS openly announced audits were decreasing because the Service lacked personnel.  That will soon change, and with that change comes the need for heightened vigilance by taxpayers regarding record keeping and record retention so that if your return is selected for audit, you have the records to come out of the audit relatively unscathed.  Because an audit starts with the IRS denying all deductions you took on the returns, to claim the deductions, you must prove to the revenue officer’s satisfaction that you have kept proper records substantiating the deduction.  If you can’t prove it, you can’t take it.  This means starting from ground zero, and therein lies the problem with old records.  So, depending on your tax situation, you may want to hang onto those records a little longer.

Scott Tippett is a principal with Offit Kurman’s Business Law Transactions group. Offit/Kurman PA counsels clients on business and matters, including representing clients before the Internal Revenue Service, Office of Appeals, and United States Tax Court, as well as state and local tax authorities.  We counsel clients regarding personal and business tax planning matters and issues and assist with the formation and structuring of entities to maximize tax savings and tax credits.  The views expressed herein are solely those of the author, and are not intended as, and do not constitute, legal or tax advice.