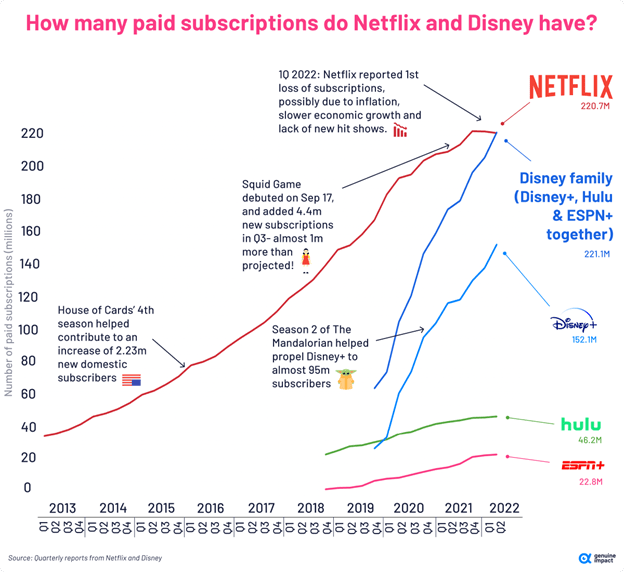 Netflix is well-known as one of the pioneers of mass-market video streaming. The service has become so ubiquitous that the word “Netflix” is now synonymous with watching a movie or television show.

But, while it’s one of the most recognized streaming platforms in the world, has it been able to maintain its dominant position in the industry now that more competitors have entered the fray?

The Walt Disney Company got involved in the streaming industry in 2009 when it first joined Hulu as a minor stakeholder, but became more directly invested in 2016 when it bought a 33% stake in BAMTECH Media, a video streaming technology company.

While Disney arrived much later on the scene than Netflix, Disney’s platforms didn’t take long to gain traction. And as of Q2 2022, Disney’s streaming empire (Disney+, Hulu, and ESPN+) has more combined subscribers than Netflix and is gaining rapidly.

In April 2022, Netflix shared its Q1 results, which showed a loss of 200,000 subscribers. Though barely a fraction of its 200+ million subscribers, it was Netflix’s first drop in subscribers in over ten years.

But change for the company is on the horizon. Netflix has announced that it plans to launch a cheaper, ad-supported service in November— something other streaming platforms like Peacock and Paramount+ have already been offering customers for a few years.