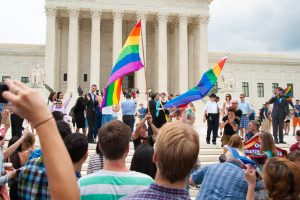 Obergefell v. Hodges is the landmark 2015 U.S. Supreme Court decision that legally recognized same-sex marriages and ruled that the right to enter into a same-sex marriage was protected by the U.S. Constitution. Going forward, same-sex couples were guaranteed to be accorded the same rights and privileges that heterosexual couples enjoy. That is and has been the law for seven years. The decision was seen as a major victory for the LGBTQ population.

Recently, Obergefell’s future seems less certain. Evidence of that uncertainty is contained in the Court’s opinion in Dobbs v. Jackson Women’s Health Organization, which reversed Roe v. Wade. Roe was a pivotal Supreme Court decision in 1973 that recognized that there was a fundamental constitutional right to an abortion based on the “substantive due process” language of the Fourteenth Amendment to the United States Constitution.

How is a Supreme Court decision about abortion rights related to a decision pertaining to same-sex marriages?

During the last 60-plus years, the Supreme Court has recognized there are numerous fundamental rights to privacy and freedom that are not explicitly mentioned in the U.S. Constitution but instead are implicit under the “substantive due process” section under the Fourteenth Amendment and therefore are entitled to the protection of the Constitution. The Court’s decisions in those cases resulted in the recognition and enforcement of fundamental rights that are woven into the fabric of our jurisprudence and our society.

All of the foregoing cases were based on the finding that under substantive due process, there existed certain basic rights to freedom and privacy that are implicitly protected by the Constitution.   The decisions in those cases became the law upon which our courts have relied upon as precedent and have served as the foundation for decisions in subsequent cases over the last six decades.

Where is the evidence that Obergefell is “on the chopping block”?

In Dobbs, Justice Clarence Thomas unconditionally advocated for the reversal of Obergefell- even though the issues in both cases – Roe and Obergefell –  are not related, and Obergefell was not before the Court. Justice Samuel Alito, writing for the Dobbs majority, declared that there was no reference to the right to an abortion under the Constitution, nor was abortion something that is “deeply rooted in this Nation’s history and tradition.”  Justice Thomas went further in his concurring opinion. He wrote that “substantive due process”-the core of the Supreme Court’s decision in Obergefell and other groundbreaking decisions- is an “oxymoron” and “legal fiction.” Thomas argued that court decisions that are based on the concept of substantive due process are defective and wrong and that the Court had a duty to reverse all decisions that were decided on the basis of substantive due process at the earliest possible opportunity.

In September 2022,  the U.S. House of Representatives passed the Respect for Marriage Act  (ROMA) which, if passed by the U.S. Senate, would repeal the Defense of Marriage Act (DOMA). DOMA prohibits the federal government from recognizing same-sex marriages performed under state law and ruled states are not required to recognize – give full faith and credit –  to same-sex marriages performed and recognized by other states. It is believed that ratifying  ROMA would send a clear signal to the Supreme Court that most Americans accept and support equal application  of the rights and privileges accorded to heterosexual married couples.