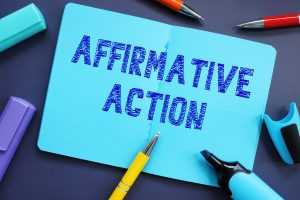 The argument continues on whether affirmative action is legal in the academic admissions setting. In October, the Supreme Court will hear arguments in two cases challenging university affirmative action programs. This is the first affirmative action case heard by the Court since the conservative majority was seated. Management of some major corporations believes that the implications of those decisions could be far broader than their effects on schools’ admissions. It could affect businesses’ hiring, too.

The cases are brought by a group called Students for Fair Admissions against Harvard and the University of NC, arguing that the school’s affirmative action admissions policies unconstitutionally harm Asian-American and white students. The universities maintain that race is only one of many factors considered in admissions, including geography, military service, and socio-economic status.

Almost 80 companies, including Meta, Apple, Lyft, Uber, Verizon, and Alphabet, filed briefs supporting the schools’ affirmative action programs. Their attorneys assert that corporate diversity, equity, and inclusion efforts “depend on university admissions programs that lead to graduates educated in racially and ethnically diverse environments.” Their position is that only by allowing universities to use affirmative action will there be enough highly qualified future workers and business leaders, especially given the increasingly global nature of the economy. The brief also states that “[E]mpirical studies confirm that diverse groups make better decisions thanks to increased creativity, sharing of ideas, and accuracy.”

Do you think workers trained or educated in a racially diverse environment are better employees?