3 Lessons About Divorce You Can Learn from the Mrs. Doubtfire Movie 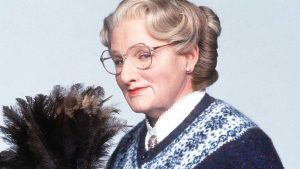 The past few weeks have been particularly busy for our firm, but I was finally able to enjoy some downtime with the family this weekend. Our family enjoys watching movies together, even if we’ve seen them a thousand times. This past weekend, we watched the movie Mrs. Doubtfire, which we’ve all seen several times, but we always enjoy it.

If you haven’t seen it, I can certainly recommend it as a great family movie where divorce is one of the main topics, but it’s presented in a way where the children’s well-being is the foremost concern of the parents. In the movie, we see a father (played by comedy genius Robin Williams) go to great lengths to be able to spend time with his children while his soon-to-be ex-wife (played by Sally Field) and her attorney seem to be looking for every reason to limit that time. While the film is comedic in nature, there are three valuable lessons to be learned from it about divorce and child custody.

Lesson #1: Get Creative to Stay Involved in Your Children’s Lives

The first lesson is that divorce doesn’t have to mean an end to a great relationship with your children. In the movie, the father, who disguises himself as an elderly nanny named Mrs. Doubtfire, goes to great lengths to stay in his children’s lives. While this may not be the solution I’d recommend for anyone (can you say “stalking charges”), it is certainly possible to find a way to co-parent successfully and still have a good relationship with your children even if you’re not together with their other parent. Depending on the work schedules and new living arrangements, it may require both parents to think a little outside the box to ensure that both parents can maximize their time with the children post-separation.

Maybe that means sharing after-school transportation or homework responsibilities outside of the “standard” court-ordered parenting schedule. Maybe it means both parents agreeing on a new sport or activity that they each support with the children. For example, if your child has always wanted to play soccer, one parent could be the coach while the other parent plans and coordinates sideline hydration and snacks for the team while cheering them on. The child gets the benefit of time and support from both parents at the same time, but the parents can maintain their own space if that’s necessary. The point is that your focus can be on the child’s well-being while finding ways to be involved as often as possible – without crossing any lines of deception.

Lesson #2: Don’t Date Someone New Until Your Divorce is Final

The second lesson is that dating someone new too soon after you separate from your spouse can backfire – big time. In Mrs. Doubtfire, the father spends a good chunk of the movie trying to keep his soon-to-be ex-wife from successfully building a new relationship with her new love interest, a client named Stu (played by Pierce Brosnan).

While the father’s efforts ultimately end in revealing that he’s been disguised as the family’s beloved new nanny and leads to him being almost completely barred from his children’s lives, it also illustrates how trying to date someone new too soon can confuse and complicate everything for everyone involved. If you’re considering dating someone new while going through a divorce, I would caution you to wait until after everything is finalized before introducing your new partner to your children – no matter how great this new person may seem.

In South Carolina, dating someone new can be considered adultery in certain situations, but in almost every situation, the court’s order will prevent you from exposing your children to anyone you could be romantically linked to before the divorce is finalized. If you continue to pursue a new relationship, you’re just asking for both emotional complications for your children and, potentially, legal consequences for yourself within the family court system. Most divorces can be resolved within a year (give or take), so it’s best to play it safe and focus on getting you and your children through the divorce before inviting anyone else in to share your new life.

Lesson #3: Turn Your Pain into Something Productive for the Future

One of the best parts of this movie is the ending. The father has been able to introduce the world to his character Mrs. Doubtfire, created totally out of his desperation to see his kids when he’s given the opportunity to host a children’s after-school program hosted by, you guessed it, Mrs. Doubtfire! In the closing monologue, Mrs. Doubtfire is answering a question mailed in from a child whose parents are going through a divorce. I won’t ruin it if you haven’t seen the movie yet, but it’s a perfect example of how divorcing parents can use everything they’ve been through and learned about their new family structure to create something positive going forward into their new life.

Ok, so maybe everyone can’t create some ingenious new kids’ programming character, but that doesn’t mean you can’t find ways to rediscover some of your passions to carry into your new future that will put a positive spin on things for you, your children, and others around you. Divorce may seem like nothing but a negative when the process first starts, and experience has taught me that there is often a lot of sadness and anger that leads to the breakdown of a marriage, but it doesn’t have to be that way forever. You are given the opportunity to be both the director and the star of your new life. Don’t waste it on hard feelings and negative outlooks.

What are your favorite movies about divorce and post-divorce life? We’d love to hear from you on social media with your recommendations.

If you and your spouse are considering divorce, don’t make any decisions about how to proceed before talking with a trusted attorney in your area. Your divorce and any settlement you create will be subject to your state’s divorce laws. Without discussing your situation with an attorney, your agreement may not be what you want or what is beneficial to your future. If you’re in South Carolina, it’s important to contact an experienced family court attorney like J. Benjamin Stevens today to discuss your specific situation.

Offit Kurman, one of the fastest-growing, full-service law firms in the United States, serves dynamic businesses, individuals and families. With 17 offices and more than 250 lawyers who counsel clients across more than 30 areas of practice, Offit Kurman helps maximize and protect business value and personal wealth by providing innovative and entrepreneurial counsel that focuses on clients’ business objectives, interests and goals. The firm is distinguished by the quality, breadth and global reach of its legal services and a unique operational structure that encourages a culture of collaboration. For more information, visit www.offitkurman.com.