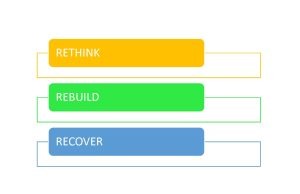 We have all seen and heard of the mega-bankruptcy cases in the news, whether for reasonable economic causes (Forever 21, JC Penneys, GNC) or for attempted strategic advantage (J&J Talc Litigation; Boys Scouts Sexual Abuse claims, or various Religious Dioceses). The costs and expense to the business entities seeking federal bankruptcy protection has become astronomical. The legal and consulting fees are in the millions of dollars each month. The concept of seeking bankruptcy relief was clearly becoming cost-prohibitive for most businesses. Just prior to the unimaginable pandemic, Congress sought to remedy the problem by creating and adopting the Small Business Reorganization Act (“SBRA”). This Act became effective February 19, 2020. The purpose was to make bankruptcy more efficient and affordable to the real-world business community. The Act sought to provide these efficiencies for businesses with less than $2,725,625 in total debt.

Literally, 30 days later, we are all in the throes of the modern COVID-19 Pandemic. At the time, no bankruptcy practitioner was truly aware of how SBRA would actually work; however, Congress, with perhaps some fear of small business collapse as a result of global economic shutdowns, adopted at lightning speed the Coronavirus Aid, Relief, and Economic Security Act (the “CARES Act”). This Act was adopted and signed by the President on March 27, 2020- just over a month following SBRA’s effective date. The most critical provision of the CARES Act was the increase of the eligibility threshold for qualifying for a Small Business Bankruptcy from the established $2,725,625 claim amount to the increased sum of $7,500,000. This increase opened up the SBRA benefits to a significant amount of business.

Why is this so important? Simply stated- the cost-effective benefits of Debtors in a Small Business Bankruptcy are significant. First, there is no obligation for a Small Business debtor to pay Quarterly Fees to the U.S. Trustee System. In a normal chapter 11 bankruptcy case, a company in chapter 11 is obligated to pay fees to assist in funding government oversight of the bankruptcy process by assessing a fee based on the total dollar amount of disbursements made by the bankruptcy company while it remains in a chapter 11 proceeding. Yes, the company, in addition to paying its regular bills and operation expenses, must pay an additional “fee” just from being in Bankruptcy. For the non-mega case- this obligation alone could, and has, caused the bankruptcy effort to fail. They did not file bankruptcy to be obligated to pay more for normal business operations. SBRA excuses Small Business debtors from paying this fee.

A second major benefit is that no creditors committee is permitted to be formed in a Small Business Bankruptcy. In the normal chapter 11 case, quite often, the larger unsecured creditors are permitted to band together and form an official recognized committee to be authorized to negotiate their best treatment from the debtor. Once established, the creditors’ committee is permitted to hire professionals such as a lawyer and accountant to represent the committee. The costs associated with these professional fees, however, is required to be paid by the Debtor. Again, a cost that can torpedo many businesses in their quest to reorganize. SBRA eliminates this exposure by prohibiting creditors committees.

The third significant benefit of the Small Business Bankruptcy is the elimination of the application of the absolute priority rule. This rule found under Section 1129 of the Bankruptcy Code provides that a debtor’s plan of reorganization cannot be approved by the bankruptcy court unless it provides that all creditors who hold a higher prioritized claim are first paid in full before a subordinated priority class of claims can retain any interest in the reorganized company. Since unsecured creditors claims hold a higher priority for payment than business owners, a business owner under a regular chapter 11 cannot retain their ownership interest unless some exception can be established. Since most small businesses are owned and controlled often by a few family members, eliminating this requirement goes a long way in promoting the salvation of America’s small businesses.

So clearly, there are great benefits under SBRA which gives a majority of small businesses a better chance at survival. The CARES Act extended this benefit to even a wider and necessary breadth of business. Unfortunately- the CARES Act extension of this increased eligibility number was only intended to be temporary. Under the original enactment, the increase was intended to revert to the original lesser eligibility amount in one year- on March 27, 2021.

With the COVID-19 pandemic remaining in flux by the early Spring of 2021, U.S. Senator Richard Durbin, a Republican from Illinois, introduced S.473 entitled the COVID-19 Bankruptcy Relief Extension Act of 2021 on February 25, 2021. The Act sought to further extend the increased eligibility for qualifying for a small business bankruptcy for an additional year until March 27, 2022. Remarkably, this legislation again moved through both Houses of Congress and was eventually signed by the President- actually after March 27, 2021- but who is watching.

This brings us to present day, and the first question asked- NOW WHAT? See on March 14, 2022, Senator Durbin again introduced legislation in the Senate- S.3823, which without saying much of anything, looks to simply eliminate Section 1113 of the CARES Act. Why is this important- because that section is the section which establishes the sunset provision for the eligibility increase. If this section was eliminated, the increased eligibility threshold of $7,500,000 would become permanent. This certainly is well supported by the Debtor Bankruptcy Bar and the American Bankruptcy Institute. Regretfully the world again gets in the way of this important legislative amendment.

On March 14, 2022, S. 3823 was referred to the Senate Judiciary Committee. Everyone was hoping for prompt consideration by Judiciary and then forwarding the Legislation to the full Senate for approval. The Bill is was optimistically anticipated before the expiration on March 27, 2022, as mandated under the current Section 1113. Unfortunately, however, last week, the Senate Judiciary got tied up with a certain Judiciary Hearing questioning some Judge looking to be approved to sit on the Supreme Court. The Committee did not have the time to consider S. 3823. The legislation was not adopted in time, and as a result, on Monday, March 28, 2022, eligibility to qualify for a small business bankruptcy reverted to the lesser $2,725,625.

Due to inflationary provisions of the bankruptcy code, on April 1, 2022, the qualification number will be adjusted to $3,024,725, however, this number is a far cry from $7,500,000. Many viable businesses have been left out in the cold.

The story- and hope is not all lost. Despite S.3823 remaining before the Senate Judiciary Committee when the higher threshold lapsed, there remains overwhelming support for this very necessary change for small business bankruptcy qualification. With the anticipated significant future increases in lending costs and a further demand on small business, demands of business will become even more pressing. Work remains to be done, but the increase in the qualification amount is favored and will hopefully be reinstated soon.

On April 7, 2022, ten days after the expiration of the law, the Senate unanimously approved the legislation with some minor revisions and sent the adopted bill to the House. According to the Congressional website, the Bill was received by the House of Representatives on April 11, 2022, and held at the desk. What happens between now and then is anyone’s guess.

Paul J. Winterhalter focuses his practice predominantly on business, financial, and bankruptcy issues. Mr. Winterhalter has been practicing in these areas for over 25 years, arguing matters before the United States Supreme Court, the Pennsylvania Supreme Court, numerous times before the Third Circuit Court of Appeals, and in many State Appellate proceedings. He has tried cases in many Federal Bankruptcy Courts and a variety of Courts and Jurisdictions including complex litigation in the U.S. District Courts.