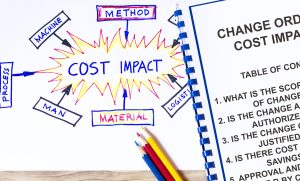 Change orders maintain order in the construction business by requiring the parties to provide prior written notice of any claims to increase/decrease the scope or work and contract price. If the owner agrees with the claim described in the prior written notice, a written change order will be issued and signed by both parties that identifies any changes in the contract scope or price. The prior written notice provision is perhaps the most critical part of the change order process because it allows the owner to investigate the claim and to provide a response that minimizes the impact upon the project costs and schedule. Therefore, it is important that owners and contractors ensure that their contracts change order provisions are well-written and clearly defined.

Although the opinion, in this case, was issued by a United States District Court in Georgia, courts in Maryland, Virginia and the District of Columbia are governed by similar principles of law and could have easily reached an identical conclusion. It, therefore, serves as an important reminder of why businesses should have their contracts drafted and reviewed by lawyers.

Businesses are sometimes tempted to contain legal costs by drafting their own contracts or by downloading contracts from random websites. However, this approach may result in a contract that contains language that is ambiguous or difficult to enforce. And just because you have used a contract before and it did not result in any disputes, that does not mean that the contract will not cause problems on the next project. This is why you should always hire an experienced construction lawyer to draft your contracts. A well-drafted contract will help your business to save time and avoid disputes.

Mark Shaffer is a first-chair trial attorney with significant courtroom experience. He has litigated throughout the United States with substantial experience in the state and federal courts of Virginia, Maryland, and the District of Columbia. Mr. Shaffer concentrates his litigation practice in construction litigation, eminent domain, contract disputes, land use litigation, and leasing disputes. He represents owners, developers, contractors, project engineers and design professionals at all levels of the state and federal courts, and includes litigating a wide variety of design defects, differing site conditions, delay claims, and change orders. He also represents owners and developers in zoning appeals, development agreements, easement rights and restrictive covenant disputes.