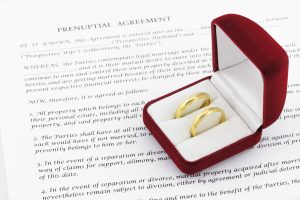 Who Needs a Prenuptial Agreement?

How Much Will a Prenuptial Agreement Cost?

If you’re considering a prenuptial agreement, it’s important to understand the typical cost. Prenups can range in price from $5,000 to $25,000 or more, depending on the complexity of the premarital estate. Normally, attorneys will charge their hourly rate for preparing these agreements, plus a retaining fee.

This process may seem like overkill in some situations. Many times, prenuptial clients will balk at the amount of financial information needed for an attorney to properly advise them through this process. However, in the event of a divorce, having a well-drafted agreement can literally be worth thousands (or even millions) of dollars in assets that you don’t have to pay out to an ex-spouse.

How Long Does the Prenuptial Process Take?

The process typically takes six to eight weeks, if necessary, but that means it’s imperative to start the process as soon as possible. It may seem awkward to have such a frank discussion with someone you’re so emotionally involved with, but by facing these issues early on, you will save yourself headaches and potential heartache by waiting too late to discuss it. You don’t want the added stress of discussing your premarital contract with your spouse or attorney too close to your wedding date. The time frame for entering a prenuptial agreement is different for every couple, but we suggest completing and executing one no less than 30 days prior to the wedding date. Most engaged couples keep a checklist of items that need to be completed prior to the big day – make sure that finalizing your prenuptial agreement is on that list.

In most cases, either the party in the stronger financial position (who earns the most income and/or has more assets) or the party who requested the prenuptial agreement will retain an attorney to prepare the agreement. The other party will then hire his/her own separate counsel to review and negotiate the terms of the agreement, which often includes making suggestions for possible changes and edits.

In most states, the recommended practice is that the final draft of the prenup must be presented to the party whose attorney has not drafted the agreement at least seven days before the prenup is signed. Once a draft has been approved by everyone, the parties and their respective attorneys will execute the agreement and required supporting documents, and official copies are given to the parties and held in each attorney’s files.

While prenuptial agreements are becoming more common, every state handles them a bit differently. There are some general rules to follow to avoid having the agreement deemed “invalid” if it’s ever time to enforce the terms.

Here are some mistakes commonly made that you should try to avoid:

If you have significant assets, have been married before, or have an inheritance to protect, you should execute a prenuptial agreement. Prenuptial agreements are not just for the wealthy; they can benefit any couple who wants to ensure their property is divided fairly in the event of a divorce. However, when you and your fiancé decide this is something you might need, hiring experienced family law attorneys to assist with this process is critical to avoid mistakes that could render the document useless.

If you and your spouse don’t have a prenuptial agreement and you get a divorce, your property will be divided according to your state’s asset division laws. This may not be what you want or what is beneficial to your future. If you’re in South Carolina, it’s important to contact an experienced family court attorney like J. Benjamin Stevens to discuss your prenuptial options before getting married. Even if you aren’t in South Carolina, Mr. Stevens can offer referrals to a well-qualified attorney located in your state.

Ben Stevens has provided exceptional legal counsel and support to families throughout South Carolina for over twenty-five years, handling all matters of family law, such as prenuptial agreements, divorce, separation, alimony, and child custody. Our firm is well-equipped to handle all divorce and family law matters, no matter your circumstances. Contact our office at (864) 598-9172 or SCFamilyLaw@offitkurman.com to schedule an initial consultation.