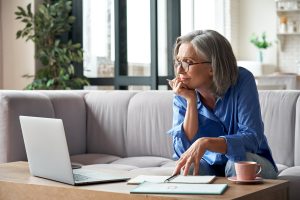 Late-in-life divorces, or “grey divorces,” are on the rise in this country, according to a December 28, 2021, New York Times article reporting on the results of a sociological study conducted at Bowling Green State University in Ohio. “Grey divorces” are referred to as such because one or both spouses are over the age of 50. According to the study, the divorce rate among spouses over 50 years of age has doubled between 1990 and 2010. Currently, one out of three divorces in the United States are grey divorces.

Data was compiled in that study concerning the financial impact that spouses experience when going through a late-in-life divorce. One of the more startling pieces of data found pertained to the significant reduction in the standard of living of the divorcing parties. Women who have gone through grey divorces suffered a 45 percent decline in their standard of living, whereas the men’s standard of living dropped by 21 percent, according to the study.

This disproportionate gender gap as it relates to the standard of living is significant. How can this gap be explained?

“Standard of living” refers to the level of income, necessities, luxuries and other goods and services that are generally readily available to a particular location or area.

This gap may be attributed to gender or age discrimination.

Another cause of the imbalance of the standard of living may be attributable in part to the roles filled by the husbands and wives who participated in the study, which they assumed during the marriage. As an example: traditionally, husbands were the sole or primary source of the income that supported the family while the wives filled the role of the stay-at-home parent. During the marriage, the husband advanced in his career, increasing his earning power in the marketplace. Meanwhile, the wife, who stepped out of the workforce and put her career on hold to care for the children and to run the household, is not generating income. With each year spent on the “mommy track,” the wife is falling farther and farther behind her work peers and is not keeping up with the latest technology, education and skills that would make her competitive as a viable employee.

Upon separation, the spouses are forced to confront the reality that the stream of income that supported one household before the separation cannot support two households after the separation. What are the options for the grey divorcee? In my next blog, I will attempt to answer that question.