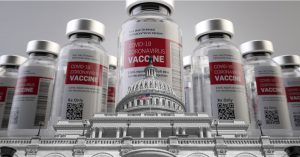 On January 13, 2022, the U.S. Supreme Court issued its opinion on OSHA’s Emergency Temporary Standards (“ETS”) mandating certain employers with over 100 employees to mandate either vaccination or a testing policy (“Vaccine Mandate”). Check out my previous blog on the Mandate. This blog gets into the Nitty Gritty of the opinion, so get ready…

Where Does OSHA Get its Power to Issue Standards?

The statute called the Occupational Safety and Health Act (“OSH Act”) explicitly declares that it is Congress’s purpose and policy to “assure so far as possible every working [person] in the nation safe and healthful working conditions and to preserve our human resources….” That specific section of the Act lists 13 ways Congress supports the goal of assuring that every person has safe and healthful working conditions. Among those 13 ways is by “authorizing the Secretary of labor to set mandatory occupational safety and health standards applicable to businesses affecting interstate commerce….”

NOTE: A statute is Congress’s mouthpiece. As we know, Congress enacts laws (aka statutes). It follows that Congress expresses its intent through statute. Here, Congress expressed its intention in 1970 when it enacted the Occupational Safety and Health Act. In 1970, Congress spoke through the statute and allowed the Department of Labor (“DOL”) to implement standards for employers.

By way of super quick background, OSHA is an agency within the DOL. So, the statute (Congress) gives OSHA the authority to effectuate standards.

BOTTOM LINE: Through the OSH Act, Congress allows OSHA to implement standards for employers to follow.

What About Emergency Temporary Standards?

As we know, the Vaccine Mandate is an “Emergency Temporary Standard” issued by OSHA. The OSH Act allows for an ETS to take immediate effect if it is determined that:

It follows that Congress (through the statute) allows OSHA to implement ETS’s in the above situations.

The Supreme Court called the Vaccine Mandate a “blunt instrument” as it applied broadly to employers without any distinctions based on the industry risk of exposure to COVID-19. The Court went on to say that the Mandate is a “significant encroachment into the life- and health- of a vast number of employees.”

Ultimately, the Court found that OSHA is a “creature of statute” and only has the authority that Congress provided. In other words, the Court looked to the OSH Act (the statute) to evaluate what OSHA can do and what it cannot do. The Court looked to see if Congress clearly allowed OSHA to issue such a mandate. The Court found that the OSH Act does not allow OSHA to implement an ETS with such “vast economic and political significance.”

COVID-19 is Not an Occupational Hazard Everywhere

The Solicitor General, arguing on behalf of OSHA, positioned that COVID-19 is a work-related danger. In response, the Court delivers its blunt response:

Although COVID-19 is a risk in many workplaces, it is not an occupational hazard in most. COVID-19 can and does spread at home, in schools, during sporting events, and everywhere else that people gather. That kind of universal risk is different from the day-to-day dangers that all face from crime, air pollution, or any number of infectious diseases.

The Court says that the Vaccine Mandate is not regulating a workplace hazard rather a “hazard of daily life.” According to the Court, such a mandate expands OSHA’s authority beyond what the statute (Congress) allows. According to the majority, the Vaccine Mandate adopted a public health regulation addressing a threat that is not even connected to the workplace- COVID is everywhere.

The opponents of the Vaccine Mandate argued, among other things:

Proponents of the Vaccine Mandate argued, among other things:

The Supreme Court replied with the following:

It is not our role to weigh such tradeoffs. In our system of government, that is the responsibility of those chosen by the people through the democratic processes. Moreover, although Congress has indisputably given OSHA the power to regulate occupational dangers, it has not given that agency the power to regulate public health more broadly. Requiring the vaccination of 84 million Americans, selected simply because they work for employers with more than 100 employees, certainly falls in the latter category.

WHAT DOES THIS MEAN?

Employers are still allowed to mandate vaccinations and boosters. This opinion does not prevent employers from implementing their own safety measures. The decision also gives some leeway to OSHA to issue new regulations that perhaps are tailored to specific industries or workplaces.

Employers should continue to consult with counsel as it relates to maintaining a hazard-free work environment.