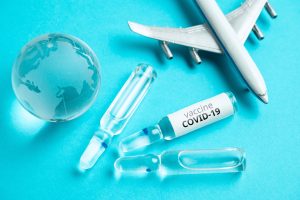 It’s a slogan that’s been ingrained in us: “fly the friendly skies.” But let’s face it, for the past eighteen months, flying has been anything but friendly, and when it comes to the majority of foreign nationals hoping to enter the United States, well, the sky hasn’t been the limit. In fact, the sky has been nearly non-existent for them.

Last spring, as COVID-19 enveloped the globe like an iron fist, the Trump administration clamped down on international travel to the U.S., hoping to slow down the spread of the virus here. On March 13, 2020, President Trump’s proclamation banned travel into the United States from more than 30 countries, and that list of nations quickly expanded. Although there were specific exceptions, such as foreign diplomats or certain family members of U.S. citizens who were allowed to fly into the U.S., most international travel bound for America came to a halt. For instance, flights from the U.K. to the U.S. were down 76% from pre-pandemic times. And while there was a change of administration in early 2021, that didn’t translate to a change in policy.

So, what does that mean if you are a foreign national hoping to come to the United States for employment, vacation, or to see family? Starting in early November, in nearly all instances, all foreign nationals must show proof of full vaccination as well as proof of a negative COVID-19 test taken within three days of boarding a flight to the United States. Failure to provide proof of both full vaccination and a negative COVID-19 test will preclude a foreign national’s entry to the U.S. Also, all passengers must remain masked for the duration of their flight unless they are eating or drinking. Expect this mask mandate to stay in place at least through early 2022.

There are a few exceptions to the new vaccination requirements, including children who are not yet old enough to be vaccinated, COVID-19 vaccine clinical trial participants, and people traveling for an important humanitarian reason who lack access to vaccination in a timely manner. However, if you are exempted from the vaccine requirement, it is important to note that you may be required to be vaccinated upon your arrival in the U.S.

No matter what your vaccination or citizenship status is, the Centers for Disease Control (CDC) is in the process of developing a Contact Tracing Order that will require airlines to collect comprehensive contact information for every passenger coming into the United States and to provide that information promptly to the CDC upon request. This will allow the CDC to follow up with travelers who have been exposed to COVID-19 variants. Airline carriers initially resisted contact tracing measures, but over the last several months, several airlines have taken steps to collect more contact information from customers on a voluntary basis. Expect this to no longer be “voluntary” soon.

While airlines have hailed the travel restriction changes, regarding them as “a major milestone that will help spur an economic rebound,” the decision to implement the changes was not fueled by economics for the Biden administration. Instead, the decision was fueled by science, given the rising worldwide vaccination rate and increased availability of testing.

These new travel policies will go into effect in early November, and I’m sure there will be more changes coming down the road, or should I say “through the air,” sooner rather than later. We’re dealing with a very fluid situation, both scientifically and politically. But with more than twenty years of experience as an attorney at Offit-Kurman specializing in international law, I’m here to help you with any questions and situations that arise…and to make this a smooth flight…both figuratively and literally.