What Can You Take When Moving Out During a South Carolina Divorce? 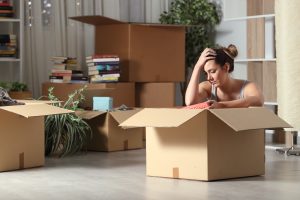 One common factor in every South Carolina divorce case is that someone has to move out of the house.  However, who moves out, when, and why may vary from case to case. While separating might be best, reducing the odds of conflict, it can be a costly change and lead to confusion about what items of personal property you can and cannot take.

The person moving out of the former marital residence often wonders what items he or she can take. There’s typically no dispute that “personal” items, such as clothing, toiletries, books, and other small things, go with the person. The same goes with separate or non-marital property, those items that the person owned previously and brought into the marriage.

While personal goods, separate property, and even small items around the house may not be controversial, things become much trickier when dealing with larger, more valuable items. For example, furniture, electronic equipment, artwork, and other collectibles are often limited in number, meaning couples may very well disagree over who gets what. So, what happens when you disagree over these things?

If a judge has already issued a decision as to which party has possession of what items on a temporary basis, then both parties should absolutely abide by the terms of the order.  If no order has been issued, then both parties may have a right to take marital assets when moving out – though knowing what to take is important.

For instance, judges rarely look favorably upon spouses who empty the house, leaving the other spouse with nothing.  Yes, those situations happen more often that you might think. Ideally, you should discuss with your attorney what you should (or should not) remove from the home before taking action.

That being said, you should understand that the property division is not final until the case is over, and any marital items that you take will likely be subtracted from your final share of the property division. As a result, be sure to document and keep careful records (including photographs or video) of what you take and what items remain, so it can be referenced later if needed.

Ben Stevens is a Fellow in the prestigious American Academy of Matrimonial Lawyers, and he has provided exceptional legal counsel and support to families throughout South Carolina for a quarter of a century, handling all matters of family law, such as divorce, separation, and child custody cases. He and his team are well-equipped to handle all divorce and family law matters, no matter your circumstances.  Contact our office at (864) 598-9172 or SCFamilyLaw@offitkurman.com to schedule an initial consultation.