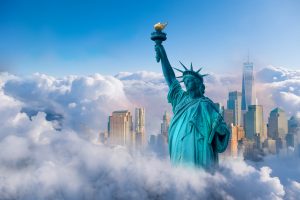 From the jeans we’ve worn for the past 170 years, to the yogurt we’ve eaten for nearly the last two decades, to the proliferating Teslas that hum along our highways, the companies founded by such foreign-born entrepreneurs as Levi Strauss, Hamdi Ulukaya (Chobani yogurt) and Elon Musk prove that America truly is the land of opportunity. It’s a nation that knows no boundaries when it comes to those who have a dream to leave their mark and in many ways change the way we live our lives…just ask anyone who’s ever googled anything (Google was co-founded by Russian born Sergey Brin). Being an entrepreneur in the United States is woven into the fabric of the American Dream, and several years ago the government put into place a unique program that would put foreign-born entrepreneurs, who had started a successful business in this country, on the path to possibly obtaining citizenship.

The International Entrepreneur (IE) Program began on January 17, 2017. It allowed foreign nationals to apply for up to five years of authorization to stay in the United States in order to nurture a start-up business that had the potential for quick and substantial growth. The program provided a way for promising foreign entrepreneurs, who might not meet the eligibility criteria of existing visa programs, to remain in the U.S. In doing so, the IE program would allow them to hopefully see their businesses flourish while hiring U.S. workers and making contributions to the U.S. economy.

But before the program could really get up and running, the Trump Administration tried to halt its implementation. It worked for a while, until a federal court in December of 2017, overruled this decision. Since then the program has been in effect but was just recently given an important boost by the Biden Administration. They wanted to prioritize the program to fill a gap they saw in the U.S. immigration system, as well as strengthen and grow the United States’ economy through increased capital spending, innovation, and job creation.

On May 10, 2021 the U.S. Citizenship and Immigration Services (USCIS) announced that the Department of Homeland Security (DHS) was withdrawing a 2018 notice of proposed rulemaking to remove the International Entrepreneur parole program from DHS regulations. This latest announcement from USCIS establishes the continuity of the International Entrepreneur parole program and the benefits it offers to foreign-born entrepreneurs and the U.S. economy as a whole.

Acting USCIS Director Tracy Renaud summed up the administration’s stance on the important program, stating: “Immigrants in the United States have a long history of entrepreneurship, hard work, and creativity, and their contributions to this nation are incredibly valuable. The International Entrepreneur parole program goes hand-in-hand with our nation’s spirit of welcoming entrepreneurship and USCIS encourages those who are eligible to take advantage of the program.”

So what does it mean for you, if you believe you have a sure-fire idea and want the opportunity to also, hopefully, obtain citizenship?

Well first it’s critical to realize that this program does not provide immigration status to approved applicants. Rather, qualifying entrepreneurs receive what’s known as “parole” – a discretionary and temporary permission to remain in the United States for up to five years. After that, they must qualify for citizenship under another U.S. immigration program.

Foreign entrepreneurs must meet the following criteria to be eligible for parole:

If approved, entrepreneurs are paroled into the U.S. for up to 30 months, but can only work for their start-up. The spouses and children of the foreign entrepreneur may also be eligible for parole. While spouses may apply for work authorization once they’re in the United States, children are not eligible to work.

And once these 30 months (2 ½ years) have come to an end, an additional 30 months of parole may be available if the entrepreneur demonstrates that:

As with the initial grant, an applicant who doesn’t meet all of the above criteria can still qualify by providing other compelling evidence of the start-up’s potential for rapid growth and job creation for the next 30 months.

135 years ago, these words became part of the American lexicon, and have been seen by  millions on The Statue of Liberty as they have come to our shores to fulfill their dreams…”Give me your tired, your poor, your huddled masses yearning to be free…” And while those words still hold true today, we can add “your determined, your dreamers, your entrepreneurs yearning to make this a better America.”

For more than twenty years I have specialized in international and immigration law. If you have any questions on how to apply and navigate Form I-941, Application for Entrepreneur Parole, or any of the subsequent forms, as well as any questions about your start-up, please contact me. I am here to provide needed guidance.