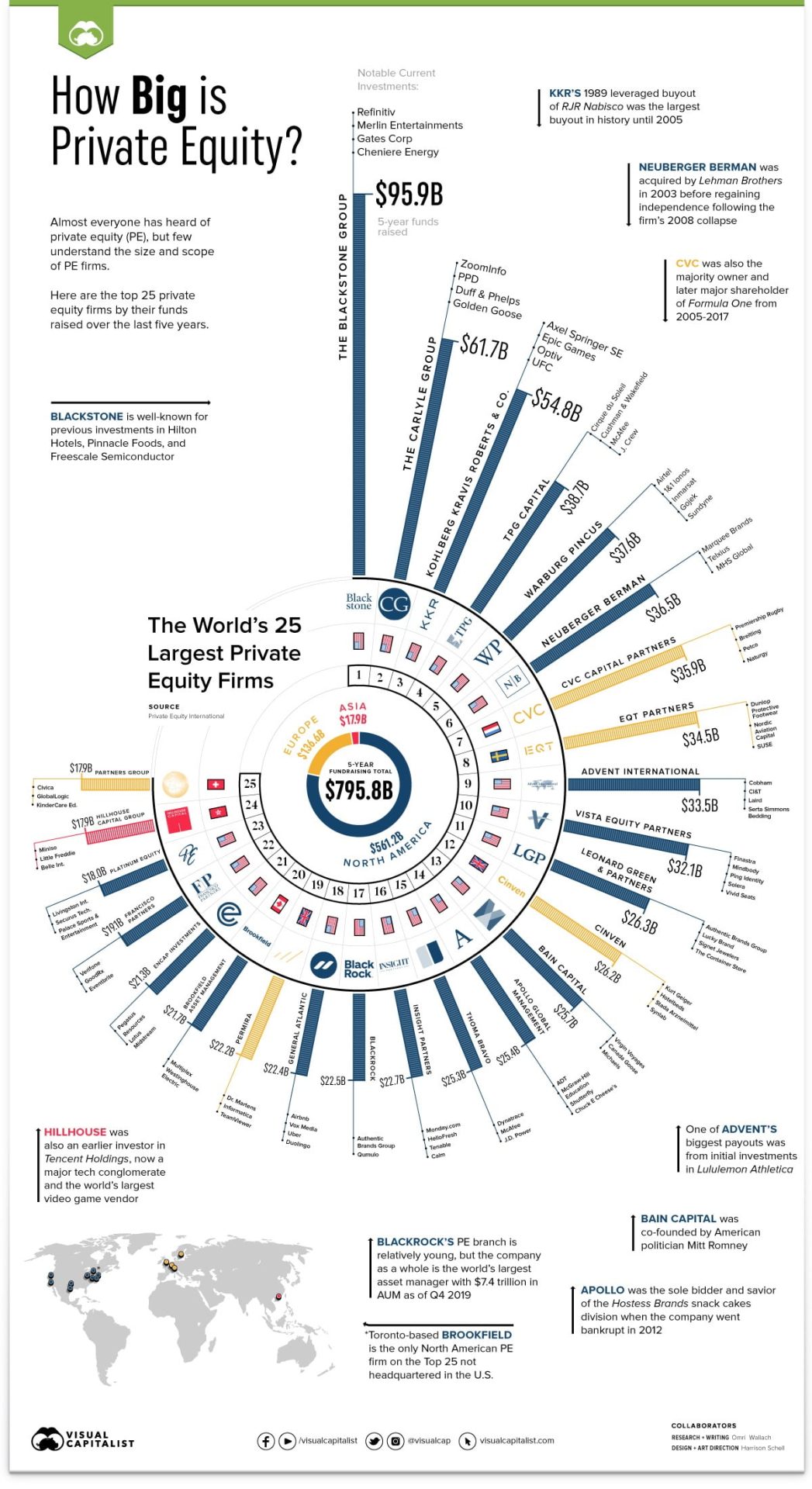 The 25 Largest Private Equity Firms Since 2015

Maybe it’s because a struggling company got bought out and taken private, just as Toys “R” Us did in 2005 for $6.6 billion.

Otherwise, it’s likely a mention of a major investment (or payout) that a PE firm scored through venture or growth capital. For example, after Airbnb had to postpone its original plans for a 2020 initial public offering (IPO) in light of the pandemic, the company raised more than $1 billion in PE funding to plan for a new listing later this year.

Yet many people don’t fully understand the size and scope of private equity. To demonstrate the impact of PE, we break down the funds raised by the top 25 firms over the last five years.

First, we need to differentiate between private equity and other forms of investment.

Each firm raises a PE fund by pooling capital from investors, which it then uses to carry out transactions such as leveraged buyouts, venture and growth capital, distressed investments, and mezzanine capital.

Unlike other investment firms such as hedge funds, private equity firms take a direct role in managing their assets. In order to maximize value, that can mean asset stripping, lay-offs, and other significant restructuring.

Traditionally, PE investments are held on a longer-term basis, with the goal of maximizing the target company’s value through an IPO, merger, recapitalization, or sale.

The List: The Most PE Funds Raised in Five Years

So which names should you know in private equity?

Here are the largest 25 private equity firms by their five-year PE fundraising total over the last five years, with data on funds and investments from respective firms and Private Equity International.

They include well-known private equity houses like The Blackstone Group and KKR (Kohlberg Kravis Roberts), as well as investment managers with private equity divisions like BlackRock. 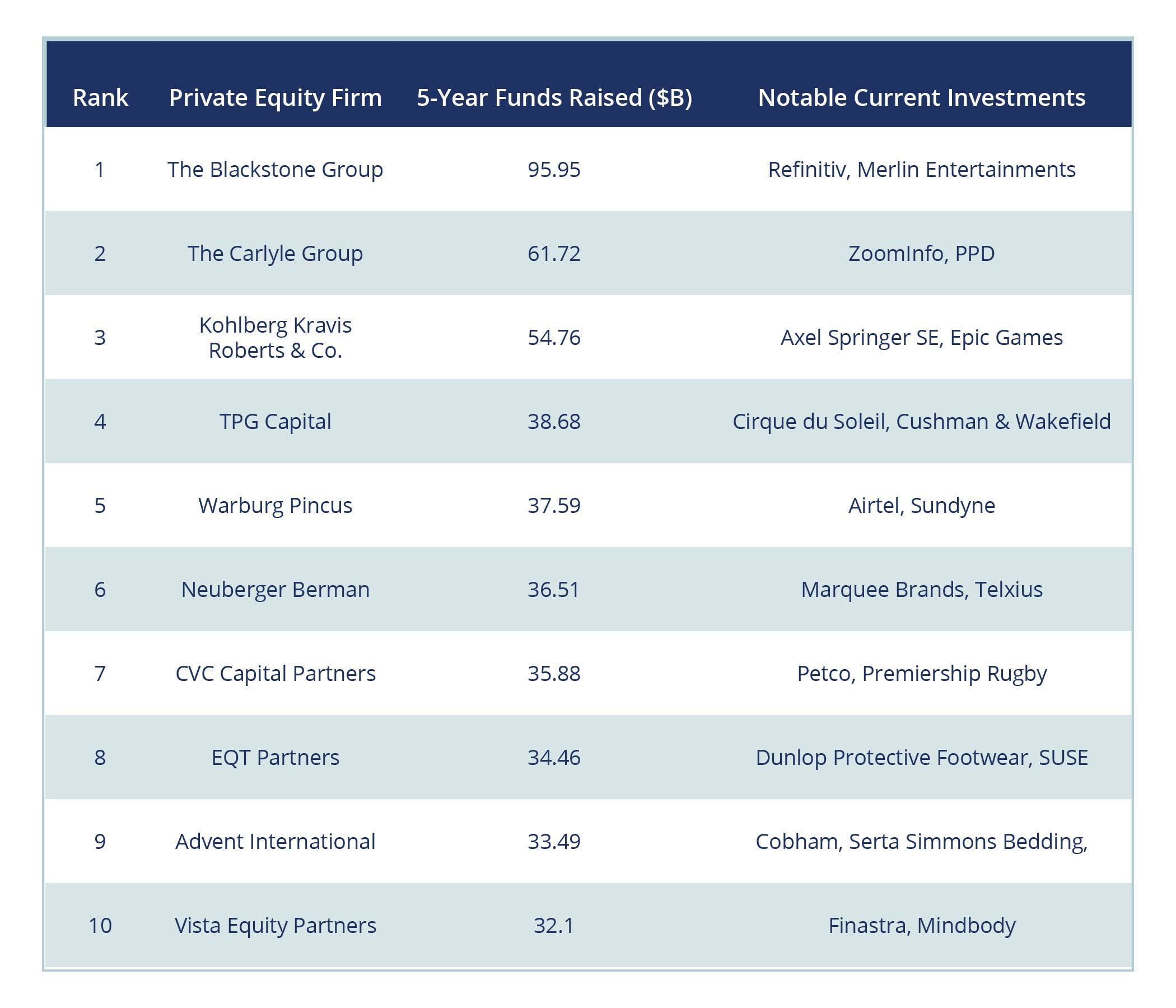 Most of the world’s top PE firms, including TPG Capital (which invested in Ducati Motorcycles, J. Crew, and Del Monte Foods) and Advent International (an early investor in Lululemon Athletica), are headquartered in the U.S.

In fact, of the largest 25 private equity firms in the last five years, just four are headquartered in Europe (CVC, EQT, Cinven, and Permira) and one in Asia (Hillhouse).

Another name that might be recognizable is Bain Capital, which was co-founded by Utah Senator and former Republican Presidential nominee Mitt Romney and found success with investments in AMC Theatres, Domino’s Pizza, and iHeartMedia.

One of the most surprising things investors discover about private equity is how many large organizations have been funded through the PE world.

Many other notable investments could soon pay off for private equity. With IPOs back in season, tech companies like Airbnb and Epic Games are ripe for payouts. At the same time, restructuring companies like J. Crew and Chuck E Cheese’s always offers a chance to recapitalize.

With the COVID-19 economic downturn resulting in newly distressed companies and potential takeover targets, expect the private equity world to be very active in the foreseeable future.