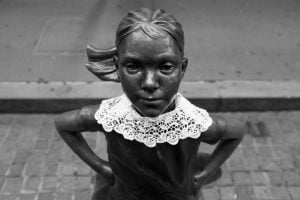 When I was President of the U.S. Chapter of the International Academy of Family Lawyers (the IAML at the time), it was my job to plan two big meetings for the chapter. My second meeting was scheduled for April of 2004, in Washington, DC. I had hoped to take the Fellows to the Capitol, the White House and the Supreme Court. Because I wanted this meeting to be especially memorable, I reached out to the Supreme Court to see if it might be possible to have a dinner there. It was. But I would be required to have a Justice of the Supreme Court sponsor the event, and that would include the Justice actually being present for the dinner. That was a lot to ask of anyone, but I was not deterred! I reached out to my friends to see if it might be possible.

I heard from a good friend, Ken Burrows, who said, “I think Kiki will agree.” Sure enough, RBG herself agreed to sponsor the dinner, scheduled for a Friday evening. The Tuesday before, I moved for the admission of twenty of the Fellows to the Supreme Court. That meant that they were able to sit in front of the bar at the Court that day. And, each of those twenty were able to bring one guest. So, forty of my friends sat in the Supreme Court on that Tuesday to hear the arguments in the case of Elk Grove Unified School District v Newdow as to whether the Pledge of Allegiance was constitutional because it included the words, “under God…”. What a unique opportunity!

Friday evening, just three days later, when I greeted RBG in the front hall of the Supreme Court, she looked at me and said, “you were in the Court this week, were you not?” I acknowledged that I had been there on Tuesday. She responded, “isn’t that fortuitous.” I told the Justice that one of the guests had represented the mother in the custody case in the lower Court in California.” RBG winked at me and said, “Yes, it is a family law case, isn’t it.” And so I concluded, correctly, that the Court would find that the Petitioner father had no standing, as he had lost custody of the child over the years.

The highlight of the evening was sitting next to RBG during the dinner. It was magical. She complimented me on having provided the best dinner she had ever had at the Court. Hard to top that evening.

I was very fortunate to have crossed paths with Justice Ginsburg over the years, and I was always impressed with her generosity and grace. Her story is also my story. I was one of very few female lawyers in my first year of law school. I, too, had a difficult time finding employment when I graduated, so I opened my own office, and the rest is history. With the passing of RBG, a legend, I hope that we all remember to be grateful for those who came before and opened the doors we then get to walk through.