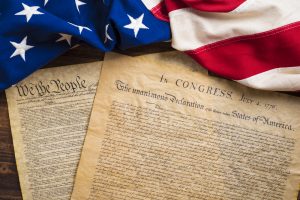 With all due respect for Thomas Jefferson, Abraham Lincoln and others, let me suggest James Madison as the author of the most beautiful and important sentence from American political history: “Congress shall make no law respecting an establishment of religion, or prohibiting the free exercise thereof; or abridging the freedom of speech, or of the press; or the right of the people peaceably to assemble and to petition the government for the redress of grievances.” Packed into that single sentence are five of the most important freedoms on which our country is based — freedom of religion, freedom of speech, freedom of the press, freedom of assembly and the freedom of petition. In addition, the First Amendment codifies the separation of church and state (sometimes known as the Establishment Clause), without which the freedom of religion would be all but meaningless. Under the incorporation doctrine of the Fourteenth Amendment these freedoms from federal intrusion have been extended to the States, meaning that all 50 State governments and all their many parts are required to honor these basic freedoms.  And so it was in NAACP v. Alabama, for example, that the Supreme Court held in 1958 that it was unconstitutional for Alabama to prohibit the NAACP from doing business in that state.

It is encouraging that even in these highly partisan times the overwhelming majority of Americans vigorously support the many rights incorporated in the First Amendment, whether it involves the right of the NAACP to pursue its mission in Alabama, or the right of neo-Nazis to march through a heavily Jewish neighborhood in the suburbs of Chicago, as upheld by the Supreme Court in National Socialist Party of America v. Village of Skokie.  The right to advocate for radically different agendas – even if sometimes unpopular or offensive — is so ingrained in our common cultural heritage that we sometimes fail to fully appreciate that they are privileges that should be relished because they are not enjoyed across most of the rest of the world.  We also sometimes fail to appreciate that we Americans are more alike in that regard than different. As much as we disagree about particular political, social, religious and other issues, we can all celebrate the fact that it is because of the First Amendment that we each have the right to vigorously express our views on the issues that divide us.