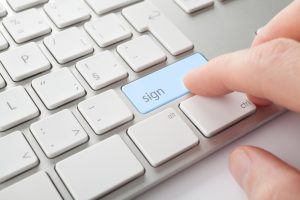 Twenty years into the 21st Century, physical signatures were already becoming as rare as quill pens when the COVID-19 pandemic emerged, with its “social distancing” and legally-mandated business closures. Since then, signing documents using electronic signatures sometimes seems not just expedient, but necessary. And it is so easy to paste a signature image on a legal document.

So what’s the problem? The problem is that sometimes, an electronic signature is legally worthless because the law requires a physical signature. Knowing when isn’t always simple.

As a matter of federal law, under the Electronic Signatures in Global and National Commerce Act (15 U.S.C. § 7001 et seq.), electronic signatures are valid no matter what state law says. Except when they are not: when a state adopts the Uniform Electronic Transactions Act (“UETA”), to the extent that that UETA doesn’t recognize the validity of an electronic signature in a particular case (15 U.S.C. § 7001(a)(1)); if the state chooses to require physical signatures in statutes related to wills and trusts, family law matters, or under any Article of the Uniform Commercial Code, other than Article Two (Sales) (15 U.S.C. § 7003(a)). Enough exceptions and pitfalls exist that checking for them is advisable.

The Many Exceptions and Pitfalls

Electronic Signatures Are Valid Only If Parties Agree

Even If Parties Agree, Not All Documents Can Be Signed Electronically

MUETA does not govern in the following areas of law (among others), many of which do not recognize the legal validity of electronic signatures:

MD Commercial Law CODE ANN. § 21-102(b). If a document falls within one of these areas of law (and this is not a comprehensive list), further analysis is needed to determine whether electronic signatures would be permitted.

The ability to sign electronically does not overcome all of the legal hurdles to remote execution. For example, in the execution of a will, the testator or testatrix, the witnesses, and the notary (if one is used) all have to be able to see each other sign the will when everyone is together (virtually). Being able to accomplish this requires careful video-conferencing choreography that can be challenging for many participants. In Maryland, if a notary is used, the signing session must also be recorded by video. That means that any mistakes in the execution will be carefully preserved for any subsequent challenge to the will.

Mr. Greber has extensive legal experience in business, privacy and data protection, intellectual property, and estate planning law. He particularly thrives in engagements that make good use of his ability to cut through complexity by providing clear explanations of options and valuable advice about the merits of each choice. His mission is to be an accessible advisor, an excellent listener, a practical strategist, an effective teacher, and an efficient implementer.