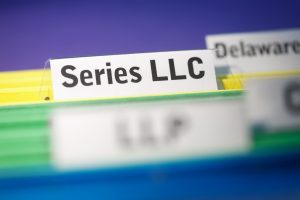 The first chapter of this article introduced Series LLCs as a relatively new and increasingly popular form of business entity to enable business owners and investors to operate multifaceted businesses under one entity somewhat like a holding company with subsidiaries for various operations and related assets, and for the owners to enjoy the benefits afforded separate business operations for ownership of assets, tax purposes and protection of one business activity and its assets from exposure to liabilities of another, all within one legal entity.  Beginning with the Delaware Series LLC statute in 1996, eighteen States, the District of Columbia and Puerto Rico, have adopted Series LLC enabling statutes.   Four of those states, including the Commonwealth of Virginia, have adopted the Uniform Protected Series LLC Act (the “Uniform Act”) which provides a broad level of uniformity among their Series LLC statutes.

Series LLC statutes also generally permits each series to own and hold its assets, sue and be sued in its own name and interest, enter into contracts, and conduct the series’ business operations to meet its business purpose. A series may also generally be terminated or abandon its business in favor of another without affecting the parent Series LLC or any other series, thus  enabling series  to enter and exit lines of business without undesired consequences to the parent Series LLC or other series

Despite general similarities among Series LLCs of the states that have adopted enabling statutes, there are also differences which may be significant, requiring that the applicable statute be thoroughly studied, and distinctions understood and regarded.  If the statutory conditions for organization and operation are satisfied, those members who are specifically associated with one or more series are considered to have direct ownership in the series and their rights, duties and powers are direct.  The debts, liabilities, and obligations of a series are enforceable only against the assets of that series and not the assets of other series or the parent Series LLC.  But not necessarily so if the Series LLC deviates from the requirements of its enabling statute.  For example, significant unique characteristics of some Series LLC statutes are:

Some states’ statutes include “false series” provisions that permit the series concept for LLCs and provide for segregation of assets, liabilities and owners, but do not provide for internal liability protection between or among series. The assumption in such states should be that protective shields do not exist for domestic Series LLCs and that they may not be available for foreign Series LLCs and their series who do business in the state.

California’s LLC statute does not provide for domestic Series LLCs but requires that a foreign Series LLC registration must provide a statement that the Series LLC is governed by an agreement providing for separate rights, powers and duties with respect to specified property or obligations, profits and losses and also declare whether debts, liabilities and obligations incurred are enforceable against the assets of the series only and not against the foreign Series LLC.

Florida’s statute does not permit domestic Series LLCs but provides that each individual foreign protected series of a foreign Series LLC must apply for a certificate of authority.

The bottom line in states that have not adopted the Uniform Act is that the enabling statute and other laws of a state should be studied when organizing a Series LLC in the state or doing business in the state with a foreign Series LLC.

The next chapter will address some of the more important areas of law that remain unclear when applied to Series LLCs and their series.