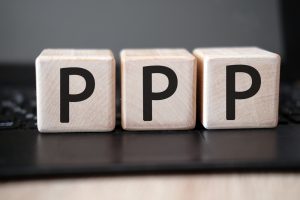 On March 27, 2020, U.S. President Trump signed the Coronavirus Aid, Relief, and Economic Security (CARES) Act.  A major part of the Cares Act is the Paycheck Protection Program (PPP), which is intended to provide economic relief to small businesses that are affected by COVID-19.  The PPP is administered through the U.S. Small Business Administration (SBA) and participating banks.  Congress funded the PPP initially with $350 billion.  Because of an overwhelming initial demand for the PPP loans, the government made an additional $310 billion available to the program.

The amount of a PPP loan is equal to the lesser of $10 million or 2.5 times the average monthly payroll.  PPP loans must be used for payroll costs, including salaries (capped at $100,000 per employee) and healthcare costs, and payments of interest on mortgage obligations, rent, and utilities. PPP loans are designed to cover 24 weeks of expenses (up from 8 weeks due to the recent PPP Flexibility Act), and do not have to be paid back if at least 60% (down from 75% due to the PPP Flexibility Act) of the money is spent keeping or rehiring employees. Otherwise, they carry a 1% interest rate and must be repaid within two years. The borrower must have been in existence on February 15, 2020.

PPP loans are available to U.S. subsidiaries of foreign companies.  One of the conditions for obtaining a PPP loan is that the borrower has no more than 500 employees (with certain exceptions).  On April 2, the SBA and the U.S. Department of the Treasury issued an Interim Final Rule (IFR) which provided that for purposes of counting the number of employees, the borrower company would need to include all its employees and those of its affiliated group companies who are residents in the U.S.  Whether an entity is an affiliate depends on factors including stock ownership, overlapping management, and identity of interest.  On April 7, 2020, the SBA and Treasury Department issued Frequently Asked Question (FAQ) #3, which confirmed that employees to be included in the count would need to be based in the U.S.

On May 5, the SBA and Treasury issued FAQ #44 in which the SBA took the position that, for purposes of determining whether an applicant for a PPP loan has fewer than 500 employees, the applicant must count both the US-based and foreign-based employees of the applicant and its affiliates.  This created confusion for U.S. subsidiaries of foreign companies which had not included their foreign-based employees in their loan applications, relying on the April 2 IFR and FAQ #3 mentioned above.

On May 18, the SBA and Treasury Department issued an IFR which provided that the SBA will not find any borrower that applied for a PPP loan prior to May 5, 2020, to be ineligible based on the borrower’s exclusion of foreign-based employees from the borrower’s calculation of its employee headcount if the borrower together with its affiliates had no more than 500 US-based employees.  The IFR made it clear that “under no circumstances may PPP funds be used to support non-U.S. workers or operations.”

As a consequence of the May 18 IFR, U.S. subsidiaries of foreign companies which had applied for PPP loans before May 5 and which had not included foreign-based employees in their employee count, are not disqualified on that ground.  PPP loan applications of U.S. subsidiaries of foreign companies after May 5, however, will need to include foreign-based employees of the company and its affiliates.

If you have any questions or would like to discuss any of these issues, please contact me at 212-545-1900 or mbloemsma@offitkurman.com.

Michiel Bloemsma represents privately held companies, entrepreneurs and investors in connection with general corporate and commercial transactions.  He assists clients with the formation of business entities, including advice with respect to choice of legal entity and drafting and negotiating of shareholders’, partnership and LLC agreements. Mr. Bloemsma assists clients with joint venture contracts, M&A deals, financing transactions, including loan and security agreements and investment contracts, and various other commercial transactions, such as sales and distributorship contracts and software licensing agreements.  He also counsels clients with respect to employment matters.  A substantial portion of Mr. Bloemsma’s practice is focused on assisting European and other foreign clients in connection with their U.S. inbound and cross-border transactions.