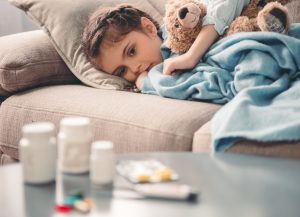 Parents often worry about the impact of a divorce on their children, but recent research suggests that divorce is not the problem.  How parents handle the divorce, however, can impact not just the children’s emotional health, but also the children’s physical health and immune systems well into adulthood.  In a study published on June 5, 2017, in the Proceedings of the National Academy of Sciences, researchers concluded that participants who reported that their parents had a high conflict separation were three times more likely to develop a cold when exposed to the cold virus.

At a time when we are all more focused on keeping our families healthy, the results of this study are more important than ever, especially for parents who are already separated or still living together but considering a separation.  How parents handle their separation has a more lasting impact than most would think.  The separation process offers numerous opportunities to choose whether to put your children first or your hurt and anger first.  These opportunities range from small moments, such as choosing a respectful tone when you talk to your child about the other parent, or larger moments, such as deciding whether to retain an attorney who is a problem solver and child-centered or an attorney who focuses on fueling the conflict.  I have never had a client who does not want the best for their children.  The problem can be, however, making the choices that serve the children’s best interest, especially when those choices run counter to the parent’s emotions.  An experienced family lawyer who focuses on creative solutions and the best interest of the children can help a parent make those choices.  Making the right choices will benefit your children’s emotional and physical health well into adulthood.

If you have questions about this or any other Family Law issue please contact Catherine H. “Kate” McQueen at (240) 507-1718 or  kmcqueen@offitkurman.com.

Catherine H. “Kate” McQueen is a family lawyer and principal in Offit Kurman’s Bethesda office and is licensed to practice in Maryland, Virginia, and the District of Columbia. Ms. McQueen focuses her practice on the many legal issues that impact families, including all the issues arising out of a divorce, such as custody, child support, alimony, and other financial and property issues. She also has extensive experience in guardianship matters for children and incapacitated adults, including assisting clients in petitioning for guardianship, serving as court-appointed counsel for alleged disabled persons, and serving as court-appointed guardian for individuals when their family members or friends are unwilling or unable to do so.