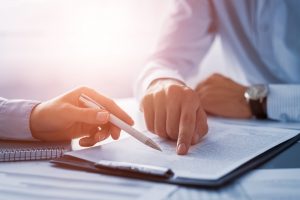 The scenario is a common one. Two businesses reach an agreement – it can be a contract for services, a joint venture, or most any other deal. After many weeks of negotiation and due diligence, though, both sides are fatigued by the details and just want to move forward with the transaction.  So, they hurry through the contracts and other documentation.

Months later, when the transaction is well underway, the two sides realize that they didn’t quite have the same understanding on some of the terms of the deal. And those terms will end up costing one of them a lot. But, since the businesses were in a hurry and sped through the documentation stage, the contract doesn’t clearly state what each business thought was intended.

The devil is very often in the details. The following are actual cases that turned on details as small as a missing comma. Although they may seem amusing, the parties involved were not laughing.

“Ten percent (10%) of Subcontractor’s contract amount shall be withheld and will be released 35 days after completion of subcontractors work.”

A grammarian would quickly see that the word “subcontractors” was neither capitalized nor had an apostrophe – either before or after the final “s”, depending on what the parties intended.

“For want of a comma, we have this case” begins the decision of the United States First Circuit Court of Appeals.

Truck drivers for a dairy company thought they should be paid overtime for their work.  The dairy company thought the drivers were exempt from overtime pay.  The underlying legal document was ambiguous.  It stated that the exemption applied only to workers who were involved in “the canning, processing, preserving, freezing, drying, marketing, storing, packing for shipment or distribution of” the dairy products.

If a comma had been placed after the word “shipment”, the drivers would not be entitled to overtime pay because they were involved in the distribution of the dairy products.  But, without that comma, the drivers could argue that they were not covered by the provision because they were not involved in “packing for shipment or distribution”.  Since the provision was ambiguous, and since the law sided with the employees in the event of an ambiguity, the Court awarded $10 million to the drivers.

The parties eventually settled – for $5 million.  For want of a comma, the dairy paid dearly.

Gary Kinder, an expert witness in legal cases dealing with grammar in contracts, advised a law firm on a non-competition provision in the contract for the sale of a manufacturing business.

The problem was that the person who drafted the clause must not have known the distinction between “that” (which does not take a comma) and “which” (which needs to take a comma): the clause began with “which” but did not include a comma.  As a result, the meaning of the clause was ambiguous.

As Kinder relates the story: “the case in Chicago settled. Smart lawyers. The thought of trying to explain the difference between that and which to a jury (or a judge) was so daunting, they decided to give-a-little-take-a-little and go on to other cases with easier issues”.

Even though the case settled, it was not the happiest of endings.  One party or the other could have gained millions (and both could have avoided the dispute altogether) if attention had been paid to contract language.

You can’t let up at the end.  Yes, you’re tired and want to move on with the opportunity, but you also have to make sure that all parties understand the terms and that the documentation clearly expresses that understanding.  That takes extra time and careful drafting, but the alternative is uncertainty and the risk of problems down the road.

If you have questions on this topic, contact Brian Hundertmark at 240.507.1750 and brian.hundertmark@offitkurman.com.

Brian J. Hundertmark has more than 30 years of experience representing the needs of his clients.  They rely on him for their estate planning, business succession, and asset protection needs. He designs personalized estate plans to help minimize the burden of gift and estate taxes while protecting assets from potential creditors.  Brian makes estate planning as timely and painless as possible.