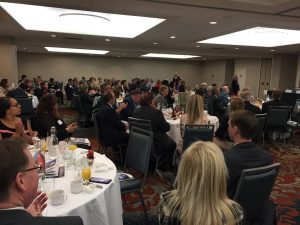 On October 25th, the Chamber hosted its annual legislative preview breakfast at the Doubletree by Hilton.

The goal of this gathering is to have the Howard County delegation inform us of what’s on the horizon from a legislative perspective.

As the midterms could have an effect on who is making the decisions, some positions are more difficult to predict.  Wages and transportation are high on the list, regardless of who is in the legislature representing us.

Speaking of which, early voting is now in full swing.

Voting day is on November 6.  There are many races that are close.  Do not assume that your vote doesn’t count.  Every vote does, so please get out and vote.  If you need transportation to the polls, please let me know.  There are many available resources out there and I’ll be happy to connect you.