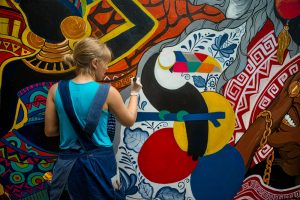 If a building achieves world renown as a canvas for street art, do its walls still “belong” to the property owner? Moreover, will the owner’s decision to demolish the building infringe on the artists’ rights to their work? These questions were at the heart of a $6.7 million intellectual property dispute in the Eastern District of New York.

The case concerned a building known as “5Pointz” in Long Island City, Queens. Originally a water meter factory, 5Pointz fell into disrepair until 1971, when it was purchased by real estate developer Jerry Wolkoff. In addition to leasing the building to corporate clients, Wolkoff allowed artists to spray-paint graffiti on its exteriors, creating a lawful and collaborative venue for street art. 5Pointz soon became known for its intricate, large-scale murals. Throughout the 1990s and early 2000s, the building grew into a community staple and cultural landmark. Its walls attracted tourism, earned press coverage, and served as backdrops in film, television, and music videos.

In 2013, Wolkoff announced his decision to demolish 5Pointz and erect two high-rise residential towers in its place. A group of artists sought a court order to prevent the demolition, claiming that any alteration of the building would violate their rights under The Visual Artists’ Rights Act (VARA), which protects works of “recognized stature” from destruction. Although the court initially issued a temporary restraining order, enjoining Wolkoff from altering the building while the artists’ motion was under consideration, the court eventually lifted the restraining order and denied the artists’ request for preliminary injunctive relief. Before the court could even issue its written opinion on the ruling, Wolkoff had 5Pointz whitewashed overnight – and the building remained that way for nearly a year until it was eventually demolished.

In June 2014, the artists—who had no opportunity to photograph or otherwise document their art before its destruction—filed a federal lawsuit against Wolkoff. The court sided with the plaintiffs: In November of last year, a jury found that in painting over these works, the developer had violated the artists’ VARA rights. And, earlier this year, 21 of the artists whose works had been destroyed were awarded $6.7 million in damages.

At a recent American Bar Association program entitled “Read the Writing on the Wall: Street Art and Real Property Rights in the 5Pointz Era,” I had the honor of joining a panel of attorneys to discuss what this decision means for artists, real estate owners, and developers. The program provided an overview of the intellectual property rights related to street art and the corresponding property rights of owners and developers. In addition to exploring key takeaways from the 5Pointz case, we discussed topics such as the impact of zoning regulations and land use laws on environments where street art is made and displayed, as well as how public art can drive redevelopment and even enhance property values.

With the right legal advice, artists and developers can work together to protect their respective interests, revitalize communities and stimulate the economy. If you would like to talk about these issues and how they may impact your property or business, please contact us.