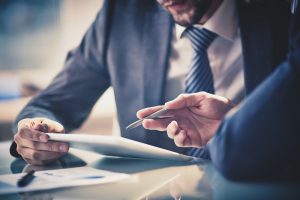 Government contractors who file bid protests typically do so to contest an award or proposed award of a contract to a competitor. A contractor may file a bid protest, for instance, if the contractor believes the winning offeror gave the agency an unrealistically low price, or if the agency improperly evaluated the proposals. However, in some circumstances, a contractor may decide to protest its own contract, or at least the contracting agency’s attempt to award a task order under the contract.

Most of the time, an IDIQ is a win-win for parties on both sides of the equation: the government gets what it needs when it needs it, contract holders face reduced or even zero competition for high-value jobs, and everyone has less paperwork to deal with. That said, the contracting agency is required to stay within the bounds of the IDIQ contract, and cannot place orders that are outside the scope of the contract. An agency’s task order request for proposals (TORP) that falls outside the terms of the underlying IDIQ contract can place an unexpected and unmanageable burden on contractors. No one wants to be locked into a deal that eliminates their ability to re-negotiate prices when the government’s needs suddenly change. For this reason, such TORPs are subject to the Competition in Contracting Act (CICA), which requires a full and open competition. Where a task order is outside the scope of the underlying IDIQ contract, the contract holders can (and possibly should) protest.

A recent GAO decision, Western Pilot Service, illustrates this principle. The case concerned multiple-award IDIQ contracts issued by the Department of the Interior (DOI) to four flight services businesses in support of the Bureau of Land Management’s (BLM) wildfire response and suppression efforts. For decades, DOI had issued two separate solicitations for these services—one to charter aircraft for on-call, short-term “surge” periods, and the other to reserve aircraft for exclusive BLM use for longer engagements of 100 days. Through the “on-call” solicitations, an offeror had the option to accept or decline a job and would be paid an hourly rate on top of a daily rate for services provided. The solicitations for longer engagements, meanwhile, obligated the contractor to set aside aircraft for the full 100 days and provided a flat upfront fee as well as compensation for hours flown.

In 2016, DOI initially released two separate solicitations for the on-call and longer engagement services. However, following several protests, DOI canceled the solicitation for longer engagements, leaving BLM with only the on-call contracts. Subsequently, rather than conducting two separate procurements for the 2018 wildfire season, DOI broke with its own tradition and issued a TORP under the on-call contracts for guaranteed use of aircraft for fixed periods in excess of 75 days. Essentially, the agency was trying to fold long-term reservations into the short-term pricing model.

As you might imagine, several contract holders took umbrage to the request. In their protest, four contract holders contended that the TORP requested services substantially different than the terms contained in the IDIQ contract. The protesters explained that the on-call and longer engagement procurements were priced differently, with the on-call procurements placing more of a premium on low price. The contractors had structured their on-call pricing models based on the anticipation that DOI would issue a separate solicitation for the long-term engagements, as it had done for years.  As a result, the TORP left them at a competitive disadvantage by using proposed on-call prices for longer engagements, which essentially set a ceiling on their pricing that limited their ability to compete. The protesters argued there was no way they could have anticipated such a situation when they submitted their price proposals for the on-call services.

GAO agreed, and sustained the protests. GAO specified that a TORP is subject to protest under CICA’s competition requirement when the contemplated task order materially differs from the original contract, and/or when it clearly reflects a departure from the way in which the agency has historically procured the services in question. Here, GAO found that the contemplated task order certainly fell outside of the scope of the original IDIQ contract, which harmed the protesters. GAO found that the government was attempting to extend the on-call, surge pricing structure out to longer jobs, which left the protesters at a competitive disadvantage.

This case demonstrates there are times when contractors can—and, in fact, should—file protests on their own IDIQ contracts, on the basis that a task order falls outside of the scope of the original contract. In evaluating whether such a protest is viable, GAO examines not only how certain terms might preclude a contractor from competition, but whether the playing field has become uneven. In either case, if a task order does not resemble the original contract, it may indicate competitive prejudice on the part of the agency, which would provide grounds for a successful protest.

If you have questions about this or any other Government Contracts matter, please contact us.