On December 30, 2017, Katherine Witherspoon was interviewed on WILM 1450/ WDOV 1410 radio station about sexual harassment in the workplace.  During the interview, Ms. Witherspoon defined sexual harassment from a legal perspective and offered advice to business owners looking to avoid and mitigate this relevant workplace issue.  If you’d like to listen to the interview or read the transcript, please see below.

Questions about sexual harrassment in the workplace? Contact Katherine Witherspoon at kwitherspoon@offitkurman.com

Dace Blaskovitz: Welcome back to Money and Politics in Delaware, new voice, new guest to the program.  Welcome Katherine Witherspoon.

Katherine Witherspoon: Thank you, Dace, hi, nice to be here.

KW: Great.  Yes, Dace, I have been admitted in Delaware since 1995.  Offit Kurman is a 140-attorney full-service regional firm.  We have offices between Virginia and New York.  I graduated Duke undergrad and NYU Law School and I practice Employment Law mostly on the defense side advising companies on best practices as well as Education Law representing students.

KW: Well, we have two types of sexual harassment under Title 7.  We have one type, which is hostile work environment which is pretty much what has been in the press lately and then we have another type called quid pro quo, which translates to something for something.  That is a much easier, more obvious example for people.  Basically, you must show the plaintiff was an employee of or applied for a job with a company.  The alleged harasser who was an officer employee of the company made unwanted sexual advances to the plaintiff or engaged in other verbal or physical conduct of a sexual nature.  Certain job benefits were conditioned by words or conduct on the plaintiff’s acceptance of the harasser’s sexual advances or conduct.  For instance, “hey baby, don’t you want this job, let’s just lie down on the couch for a couple of minutes.”  At the time of the conduct, the alleged harasser was a supervisor or agent for the company.  The plaintiff was harmed by the conduct and the harasser’s conduct was a substantial factor in causing the plaintiff harm.  That sounds a lot more complicated than it really is.  Basically, it is the scenario I just mentioned about, hey, let’s go lie down on the director’s couch; you know, I will hire you if you go along with this or I will keep you employed if you go along with this.  Now, what’s a little trickier is this hostile work environment type and to make out a claim for hostile work environment based on sex, a plaintiff must establish that he or she suffered intentional discrimination because of the sex of the person.  The discrimination was severe or pervasive, and this is where reasonable minds disagree.  The discrimination detrimentally affected the plaintiff, you know plaintiff was affected in a bad way.  It would detrimentally affect a reasonable person in like circumstances.  Again, what is a reasonable person and the existence of respondent superior liability, which means the harasser was an employee basically of the employer at issue that’s fancy lawyer talk for, the person had to have worked for the employer when they harass you to hold the employer liable for the harassment.

DB: Alright, and in our pre-interview, you said you hoped the audience understood two key points; let us do them one at a time, first and everybody is sitting on the edge of their chair, the company is liable.

KW: Correct, that is why I am involved because I represent companies who must make sure that their employees are complying with the law and don’t do things, which might expose them to liability for these things, it is not the exposure to liability of the harasser.  The harasser could be sued separately perhaps for offensive touching or criminal charges could be brought if it rose to that level, but the liability is on the company.

KW: Right, that is the other thing I wanted to make sure that came across.  A jury is going to make this decision in most cases.  A person is going to bring a claim in court and the court is going to decide whether that claim meets the elements that I set forth, was there intentional discrimination, was it severe or pervasive, did it detrimentally affect the plaintiff, so sometimes the court would throw out the claim before it even got to a jury and say like, look, this person made five remarks to the alleged plaintiff, the harassee, and over the course of five months and that is not enough.  It is not detrimentally effective, it is not severe or pervasive and then kick it out, but in a lot of cases, the person is going to get to a jury and then we have a jury sitting there and are they reasonable?  Do they agree on a reasonable person’s standards?  Who knows.  It really depends on who is sitting in the jury box, what people are going to decide, what was okay behavior and what wasn’t okay behavior.

DB: Now, let’s go a different way, just a minute.  Two people are competing for a hypothetical job, one might hypothetically think he or she was sexually harassed by the other, obviously for self-gain under my hypothetical.  I‘m long winded to a basic question, how do you stop the dubious claims?

KW: Right, there really is nothing you can do as an employer about dealing with dubious claims.  The employer’s duty is clear.  They must investigate every claim that is made and whether the investigation reveals that the person can only come up with a couple of remarks or one alleged incident and there is no one to corroborate any of this evidence, then you are safe in going forward and saying, no, really this is not real.

DB: Let me interrupt you a second, just a second, because we are going to run out of time, tick tock on my clock, and that is pulling a private conversation and putting it on the air, Katherine Witherspoon says to me, it’s gone too far.  I found that fascinating.  Share that with the audience.

KW: I do not want people with legitimate claims to be sidelined because too many people are coming forward with things like, he said things to me daily or he or she touched me once or twice on the shoulder.  I don’t want people to fall under the spell of the boy who cried wolf.  I want people to take these claims seriously and when things do come up which are not serious, it diminishes the power of the actual person who comes forward with the courage to report the harassment.

DB: I got to turn to the audience.  It’s Katherine Witherspoon, I found her fascinating.  We have already got a date in February where she is going to join us on yet another subject.  Her direct dial, Katherine I need help here 302…

DB: Fascinating, absolutely fascinating.  Again, we have her coming back in a couple of weeks.  I got to turn to the audience and let’s see.  When we come back from break, economist John Stapleford talks about the county’s finances, at least the numbers.  Are you ready for a tax increase, New Castle County?  We will be right back. 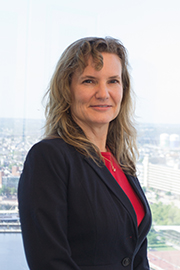 Ms. Witherspoon has 22 years of litigation experience in every Delaware court, the U.S. Court for the District of Delaware, and the U.S. Court of Appeals for the Third Circuit. She has also represented clients in proceedings before the Delaware Department of Labor, the Equal Employment Opportunity Commission, the Merit Employee Relations Board, and the Delaware State Board of Education. Her employment practice focuses on discrimination; employment termination; unemployment compensation appeals; Fair Labor Standards Act issues; creation and review of employee handbooks and policies; severance agreements; and labor relations.