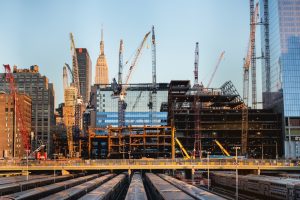 New York City has taken a bold yet controversial step toward remedying a disturbing increase in construction site accidents and deaths.

On September 27, 2017 the City Council of New York City adopted a site safety provision amending the local Construction Safety Act. This amendment mandates as much as 55 hours of safety training for persons engaged in the construction and demolition on “major building projects” in the City. The law exempts union members who complete qualified apprenticeship training programs and penalties for noncompliance can reach $25,000 per violation. Workers have to complete the requirements by December of 2018.

The amendment to the NYC safety law (referred to as “Intro 1447”) is not unique in concept. Seven states and many municipalities, including Philadelphia, have implemented similar safety provisions in “Responsible Contractor Ordinances” requiring workers to essentially follow otherwise non-mandatory Federal OSHA training standards. However, the Intro 1447 distinguishes itself in mandating training requirements well beyond those set forth by OSHA. For example, under the Philadelphia law workers are required to complete basic ten-hour OSHA training courses (“OSHA 10”). Again, Intro 1447 exceeds that requirement by as much as 5 times.

The New York City safety act has been a lightning rod for controversy since it’s proposal. Developers pushed back on the law claiming that the requirements do not address specific site safety issues on a given project and that implementing the training is an unnecessary cost that is often passed on to the taxpayers on public projects. The developers and open shop contractors argue that the law discriminates against immigrants and favors unions who are exempt from the Act’s training requirements. The net result, developers argue, is a project that is no safer yet costs the taxpayers much more. Unions argue that worker safety is paramount and that lack of safety instruction results in more accidents, with many of the victims being undocumented and poorly trained immigrants.

As the economy continues to grow and projects increase nationwide, there will be a concomitant increase in worker accidents. More work, more workers, more accidents. For those involved in construction planning and execution, particularly in New York City, expect to become more involved in the safety of job laborers through implementing and paying for worker training. From a risk management perspective, developers and contractors are well advised to fully understand applicable RCO’s and particularly those provisions that mandate that they educate their labor.

If you have any questions about construction law please contact us.