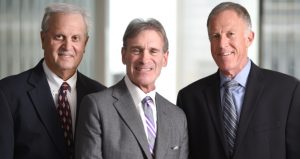 Earlier this year, Offit Kurman celebrated its 30th anniversary. The law firm, based in Fulton, Maryland, has grown from a three-person operation into a diverse group of more than 130 legal practitioners and over 150 administrative professionals in multiple office locations throughout Maryland, Pennsylvania, Virginia, and the greater Mid-Atlantic region.

Brothers Maurice and Ted Offit started the firm along with their childhood friend, Howard Kurman, in 1987. It was not until the mid-2000s, however, that Offit Kurman started to add attorneys and expand in a significant way.

“It happened almost by accident,” Maurice Offit told the Maryland Daily Record in July. “We were a Baltimore firm—all of us were born and raised in Baltimore—and then our office was in Owings Mills. We had gotten to the point where the firm had gotten too large for the Owings Mills office. We had a choice to make. One was to relocate to a larger Baltimore County locale, or the other was to start to branch out and go into other parts of Maryland. We decided to branch out. It was one of the best decisions we ever made.”

Today, the law firm provides individuals, privately held businesses, and families of wealth with a comprehensive array of legal services in areas such as commercial litigation, estates and trusts, mergers and acquisitions, intellectual property, immigration law, privacy and data protection, and more.

Growing throughout the Mid-Atlantic region—an area that encompasses the Baltimore, District of Columbia, New York City, and Philadelphia metropolitan areas—not only increased Offit Kurman’s size but deepened the firm’s service offerings as a comprehensive legal partner that leverages large-scale capabilities with a small-scale focus on every client. According to Howard Kurman, this was precisely the reason the founders decided to expand.

“It’s very difficult in today’s legal market to be very small or of constricted size because the concept of being a one-stop shop for your clients becomes harder the smaller that you are,” he said. “Frankly, I think the future of the legal market is not in the small firm, unless it’s a niche-oriented [or] boutique.”

Between 2008 and 2011, one of the worst global economic periods in history, Offit Kurman’s revenue doubled and its staff multiplied by a factor of ten. Offit, Offit, and Kurman partially attribute this extraordinary pattern of growth to the firm’s compensation model, which rewards originators and producers equally, and does not cap bonuses. At Offit Kurman, high-capacity sellers and those whose main focus is achieving client goals can each concentrate on what they do best, without spending energy negotiating or competing with fellow practitioners in-house. With reduced overhead, a network of attorneys experienced in niche practice areas, and endless room to build their books of business, attorneys who join Offit Kurman have, in some cases, as much as tripled their profit margin.

Attorneys also join Offit Kurman in light of its many recognitions. Offit Kurman’s attorneys are renowned litigators, sought-after speakers, and widely-circulated writers, and as the firm has added practitioners and office locations, honors and awards have followed.

The most recent Law360 400 list recognized the firm as the 311th largest in the United States. Offit Kurman has also been included on The Inc. 5000 list of the fastest growing companies in the US, and has been ranked a “top” law firm in several of the states in which it operates.

Meanwhile, dozens of individual members of the firm have been named to Super Lawyers, Best Lawyers, and AV Preeminent® lists throughout the years. Additionally, Offit Kurman has the unique distinction of counting five Fellows of the American Academy of Matrimonial Lawyers within its ranks.

But regardless of their past accolades and accomplishments, the men and women of this dynamic legal group are keeping their eyes directed toward the future. The firm plans to employ 200 attorneys by the year 2020. Along the way, it will launch even more practice groups and partner with more regional organizations to develop innovative legal solutions in tandem with the pace of its clients.

“In order to have a plan, you have to have goals and metrics that are tied to the clients,” Ted Offit remarked. “We had a growth plan; it was a regional growth plan. We decided to grow at a 10 percent growth rate. When we extrapolated the numbers, [it] came to a 200-person target.”

“We’re looking to recruit two kinds of attorneys,” he continued. “One would be an attorney that provides us with depth to an existing practice. The other is an attorney that provides us with scope into new areas of practice or new geographical areas. The Offit Kurman way is to be entrepreneurial and to concentrate on business development and to take advantage of the firm’s marketing footprint.”

Join Offit Kurman as the firm celebrates 30 years in business—with a full lineup of special events, video interviews, and more. Readers are welcome to follow the firm on Facebook, Twitter, and LinkedIn, and at www.offitkurman.com.